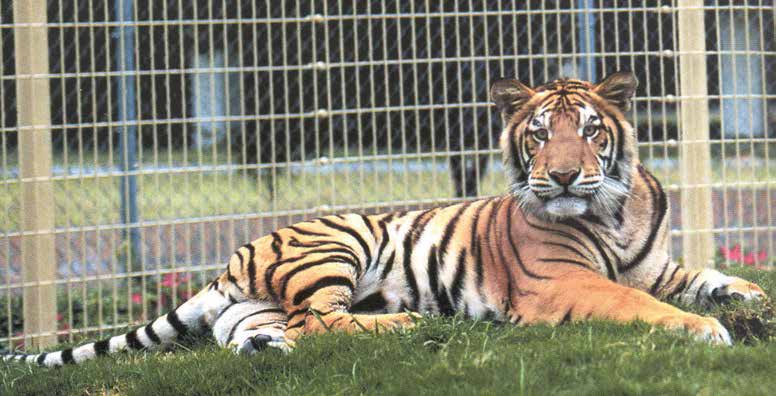 Mike V was born October 19, 1989, and came to LSU when he was four months old. Mike V was donated to LSU by Dr. Thomas and Caroline Atchison of the Animal Zoological Park in Moulton, Ala.

He was introduced to LSU fans at the LSU-Alabama basketball game in February 1990, and he was moved into his home, north of Tiger Stadium, on April 30, 1990.  When Mike V first came to LSU, his night house was part of the original habitat constructed in 1937.

Mike V passed away at 2:23 a.m. on May 18, 2007, of renal failure. He had been anesthetized and brought to the LSU SVM on May 16 so that Dr. David Baker could determine the cause of recent weight loss and respiratory difficulty. During the examination, it was determined that Mike had a large amount of fluid around his lungs. Emergency surgery was performed, and the fluid successfully removed. Unfortunately, Mike’s aged kidneys could not tolerate the anesthesia and failed.

Mike V was cremated, and his ashes are located in the Andonie Museum next to the LSU Alumni Association on LSU’s campus.