Friends of French Studies Past Events

April 12, 2022
In the fall of 2018, the state of Louisiana was accepted as a member of the Organization Internationale de la Francophonie, which is comprised of Francophone and Francophile countries and governments from all over the world. Membership allows for increased funding for Louisiana’s French immersion programs and improves access to and cooperation with the French-speaking economies of the 84 member countries, provinces, and governments which promote the use of French and celebrate their ties to the language.
On April 12 the state of Louisiana and CODOFIL hosted a reception for the Secretaire-Generale d’OIF, Louise Mushikawabo, at the Welcome Center at Capitol Park.  Friends of French members were invited, and many attended.

March 25, 2022
The celebration of Le Mois de la Francophonie continued with a French Wine Walkabout in which we partnered with Martin’s Wine and Spirits.

February 3, 2022
For the second year, as new Covid 19 cases surged, the Annual Meeting was held via Zoom with Board President Susan Rolfs presiding.  New officers and directors were elected, and attendees welcomed the new Consule Generale de la Nouvelle Orleans, Nathalie Beras, and members of her staff.

July 14, 2021
Friends of French Studies hosted a Bastille Day Celebration at the City Club of Baton Rouge.  Along with a tasty selection of hors d’oeuvres, members and guests were treated to the lively music of James Linden Hogg, who played the violin in period costume.

February 11, 2021
Due to the Covid 19 global pandemic, the Annual Meeting was held via Zoom.  Board President Susan Rolfs led the meeting in which new officers and directors were elected. Catherine Hudson and Thefenne from Tout Va Bien Boulangerie made a presentation about their bread-making process.

February 3, 2021
Members of Friends of French Studies were guests of the Department of French Studies and The Center for French and Francophone Studies in an online event honoring their former colleague Edouard Glissant on the tenth anniversary of his death. The event included readings of his texts in French and in English.

November 8, 2020
A virtual Fête Champêtre was held via Zoom. LSU Instructor Erin Segura gave a talk on the LSU Louisiana French Program and the department's Oral Histories Project. Commemorative Tote Bags and Stemless Wine Glasses were distributed before the event to enjoy during picnics at home.

August 17, 2020
A virtual Wine Tasting was held via Zoom.  Participants learned about rosé wines and were given a list of selected wines to try at home.

July 14, 2020
Members observed Bastille Day by attending the Department of French Studies Award Ceremony recognizing the hard work and achievements of award recipients.  This event was held online via Zoom.

The Baton Rouge Country Club was once again the scene of the Annual Meeting and Dinner.  Board President Michael Vincent presided over the meeting and 2020 Officers and Directors were elected.  Richard and Seola Arnaud Edwards, Jacqueline Labat (posthumously), and Jean and Mary-Louise Mercier were named as the first inductees into La Société Louis Curet.  Leanne Clement and Dennis Jesse from Opera Louisiane performed songs from The Tales of Hoffman. 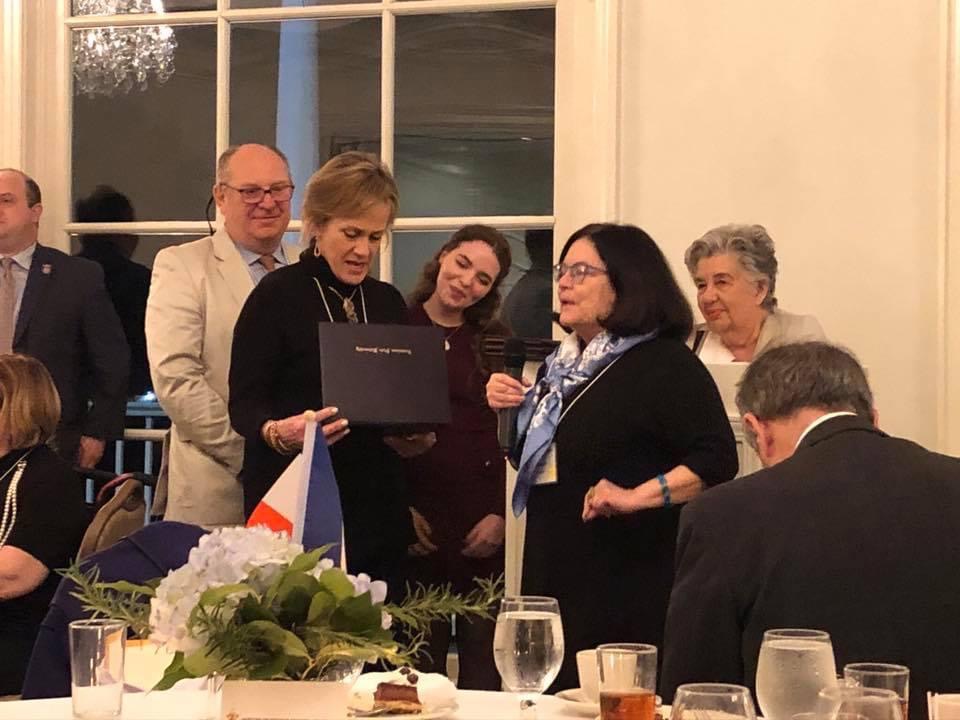 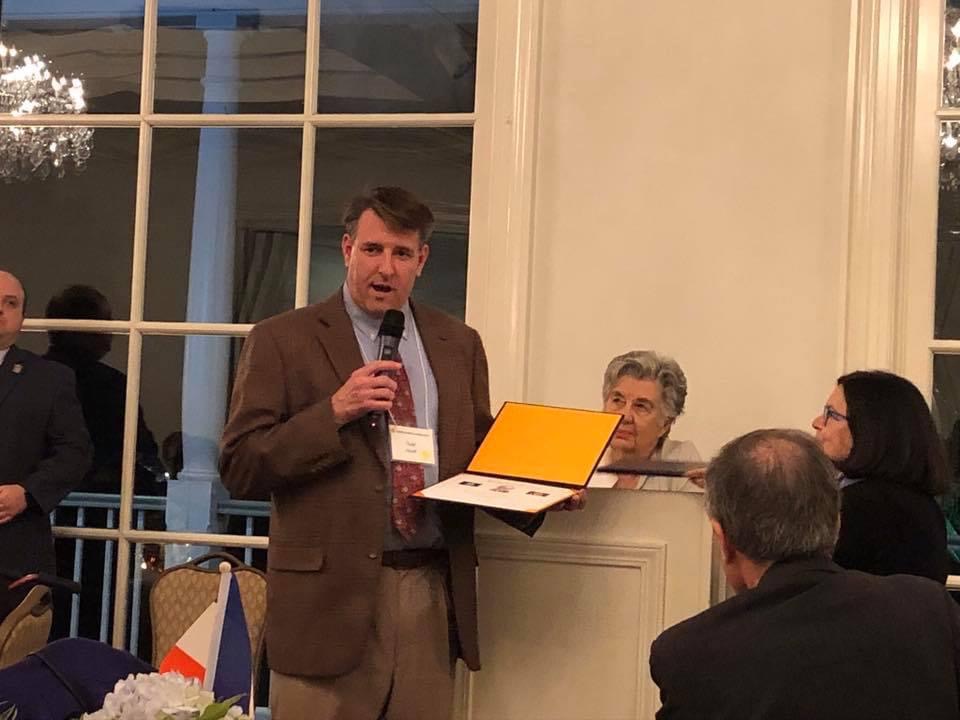 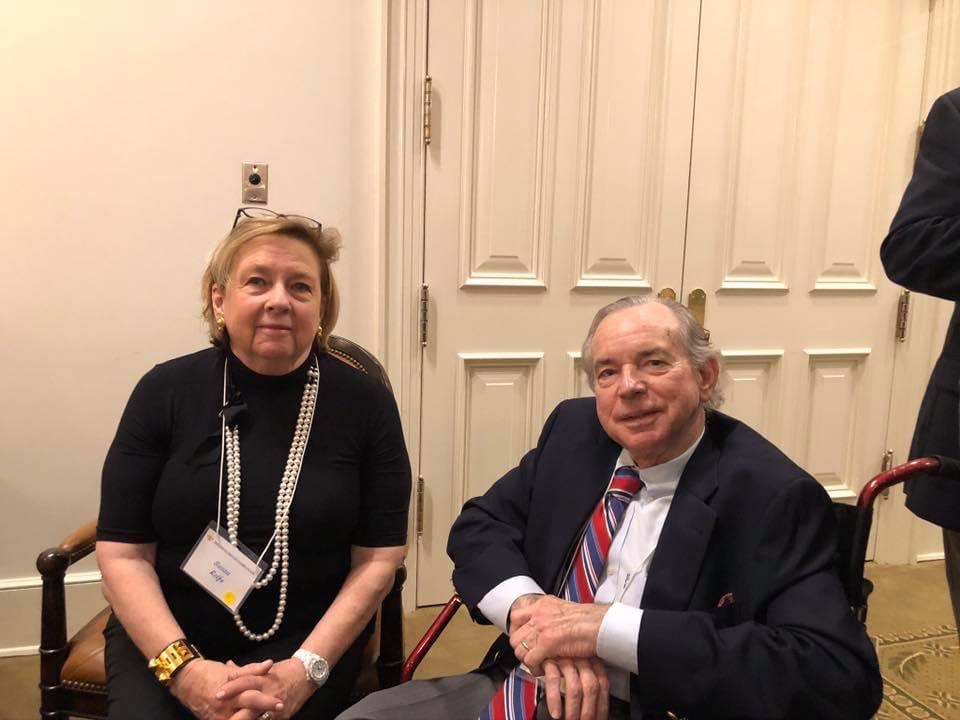 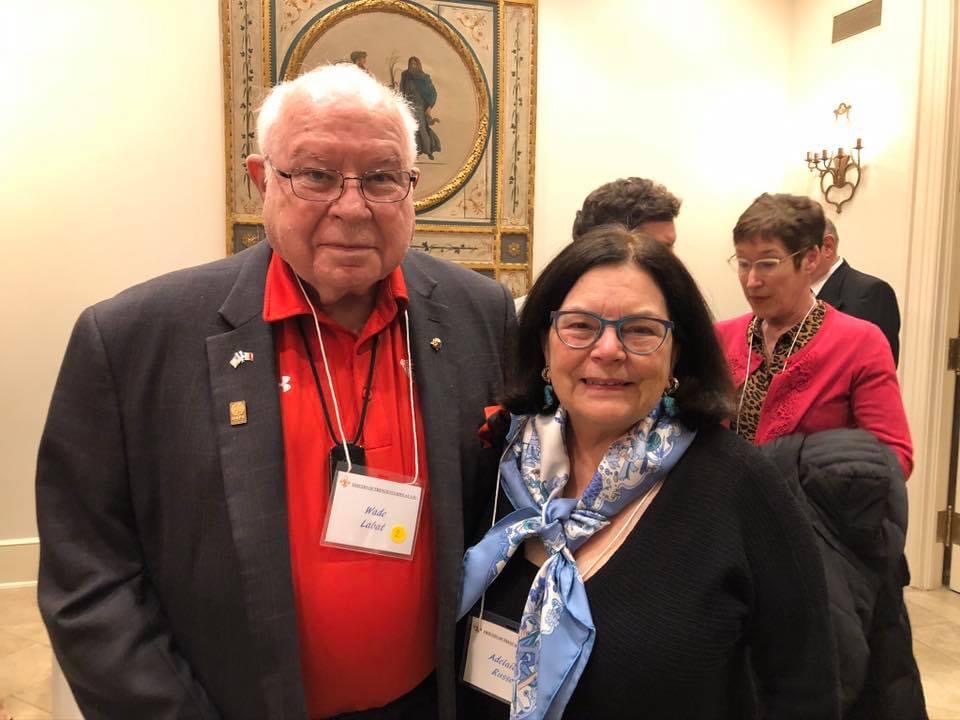 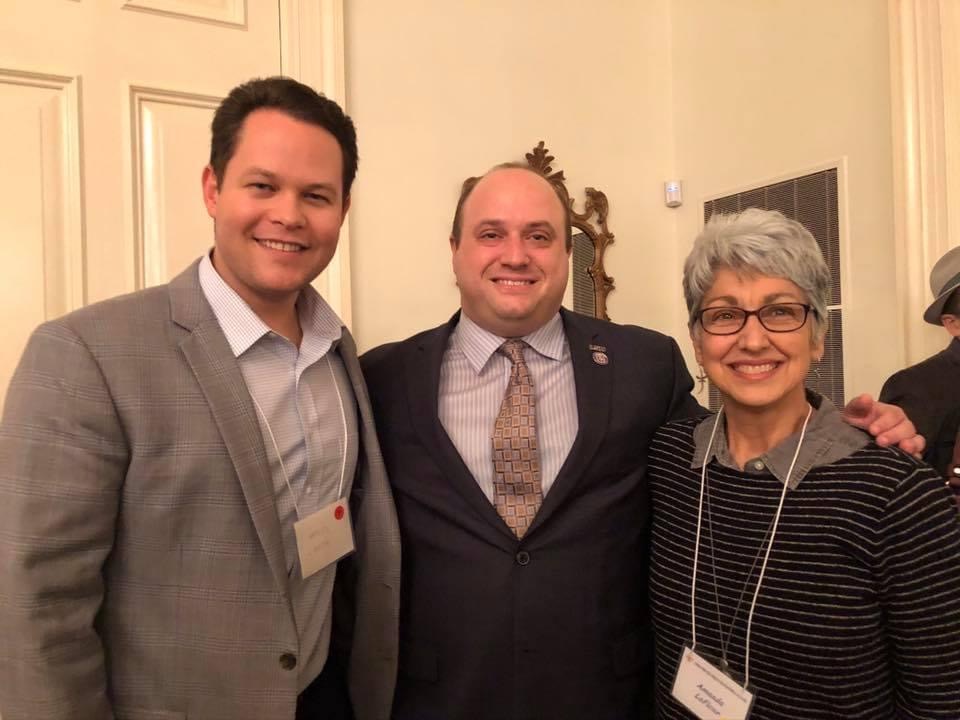 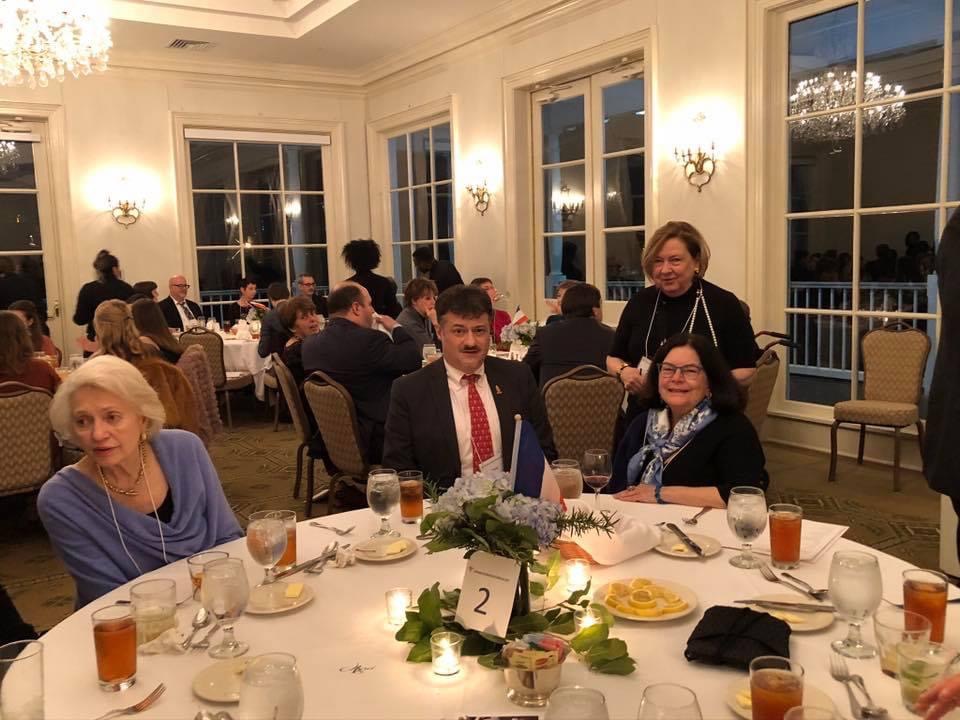 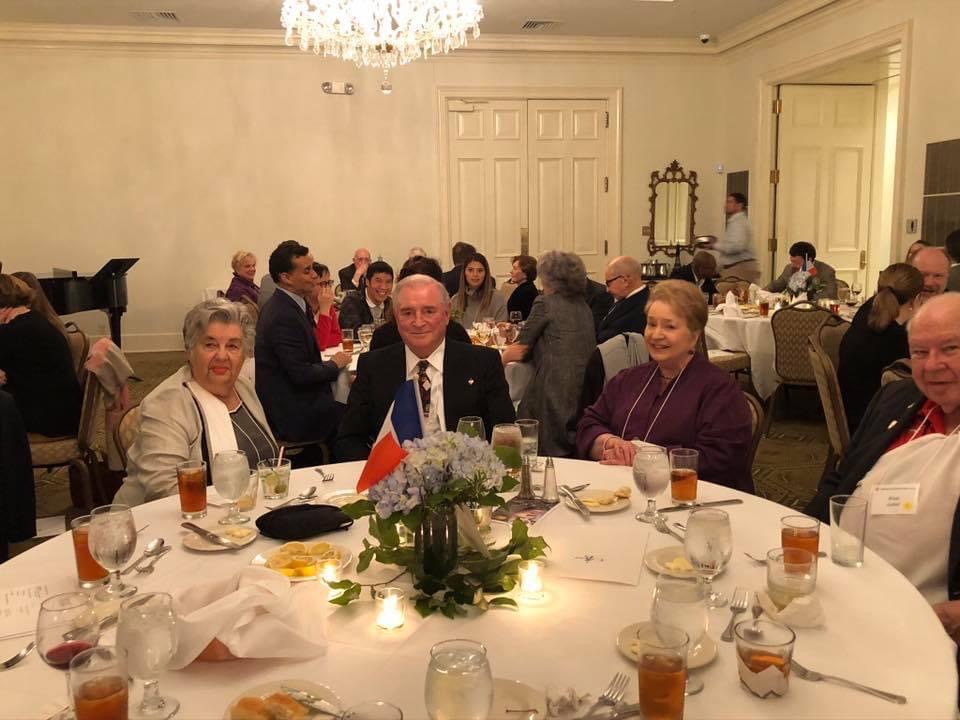 Friends of French Studies members and friends met at the French House for Translating the Civil Code presented by Professor Olivier Moréteau. Dr. Moréteau’s translation represents the first time since 1825 that the current Louisiana Civil Code is available in both English and in French.  Complimentary wine and light refreshments were served. 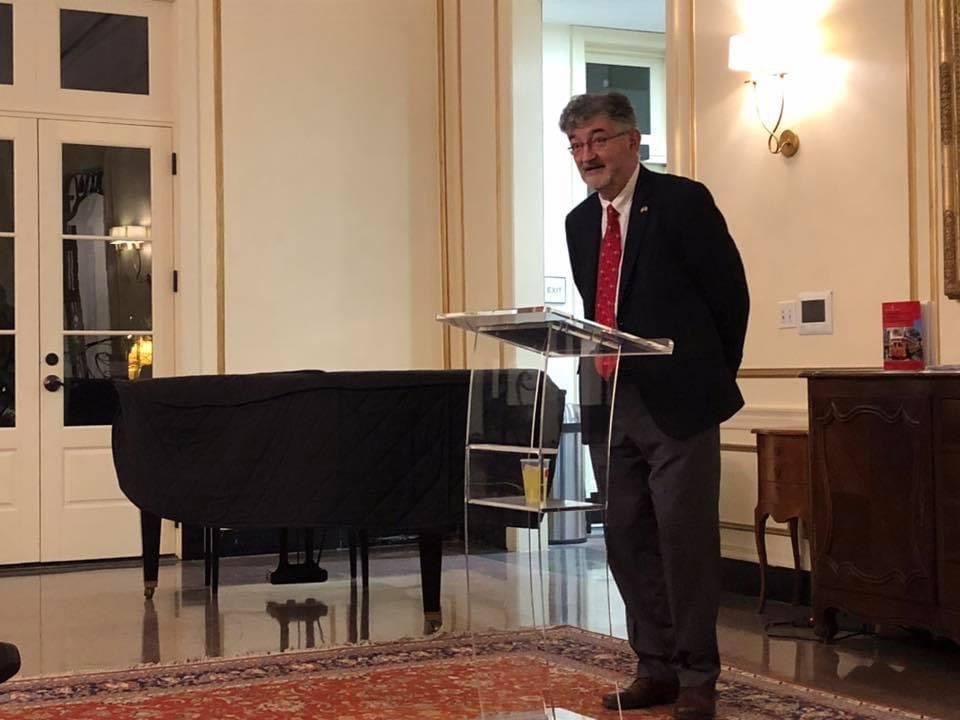 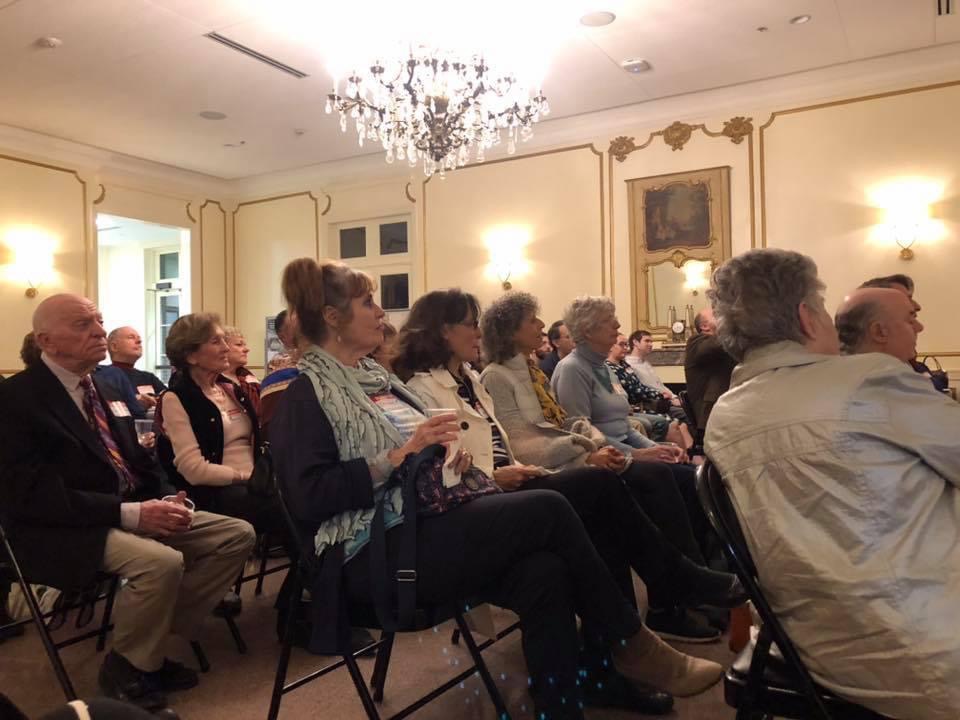 Magnolia Mound was the scene of the 2019 Fête Champêtre.  Music was provided by CP and Ses Amis and guests were treated to complimentary tours. 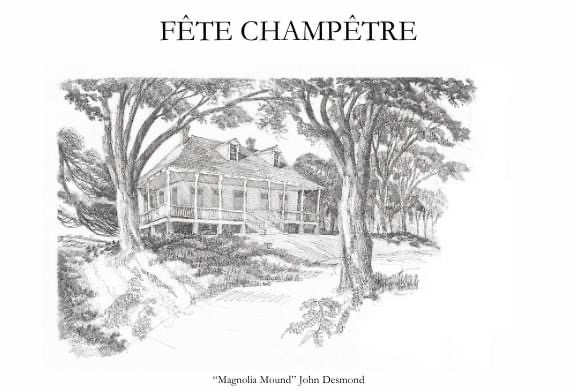 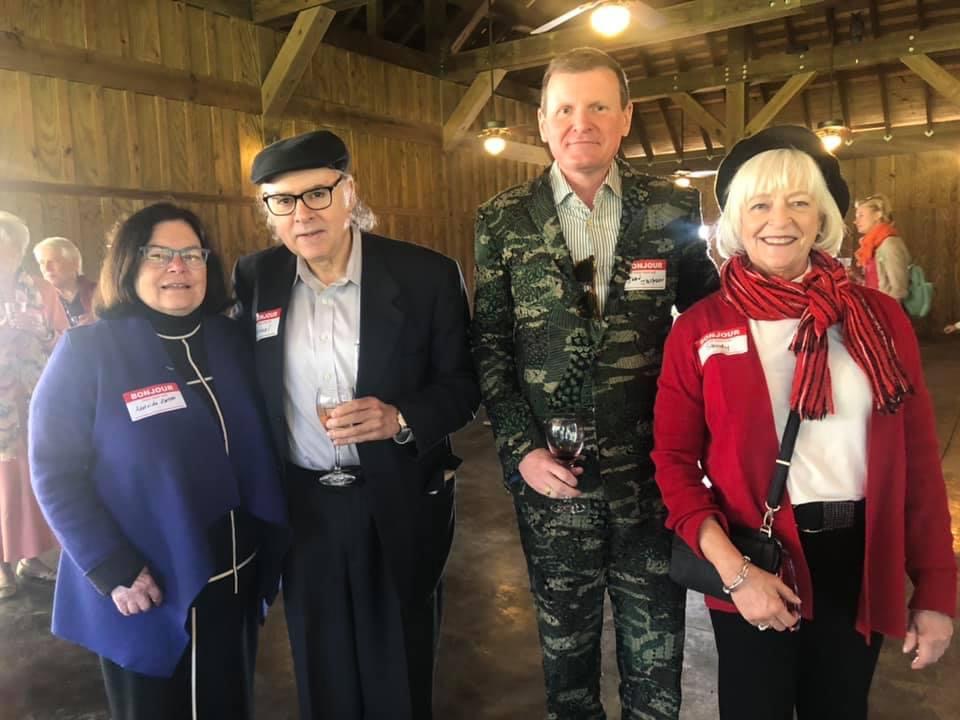 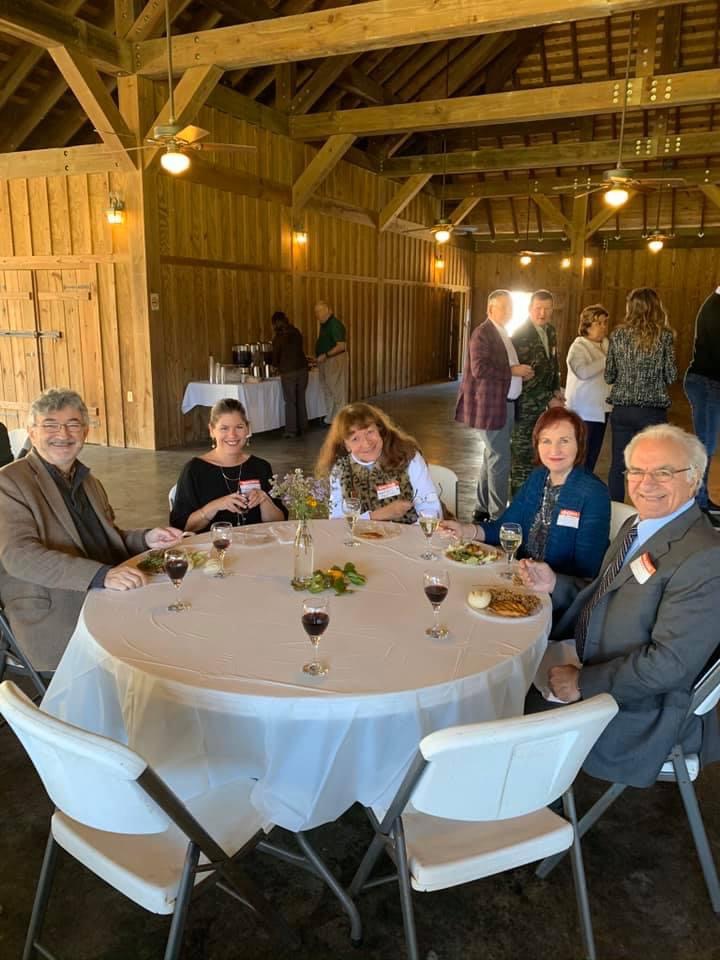 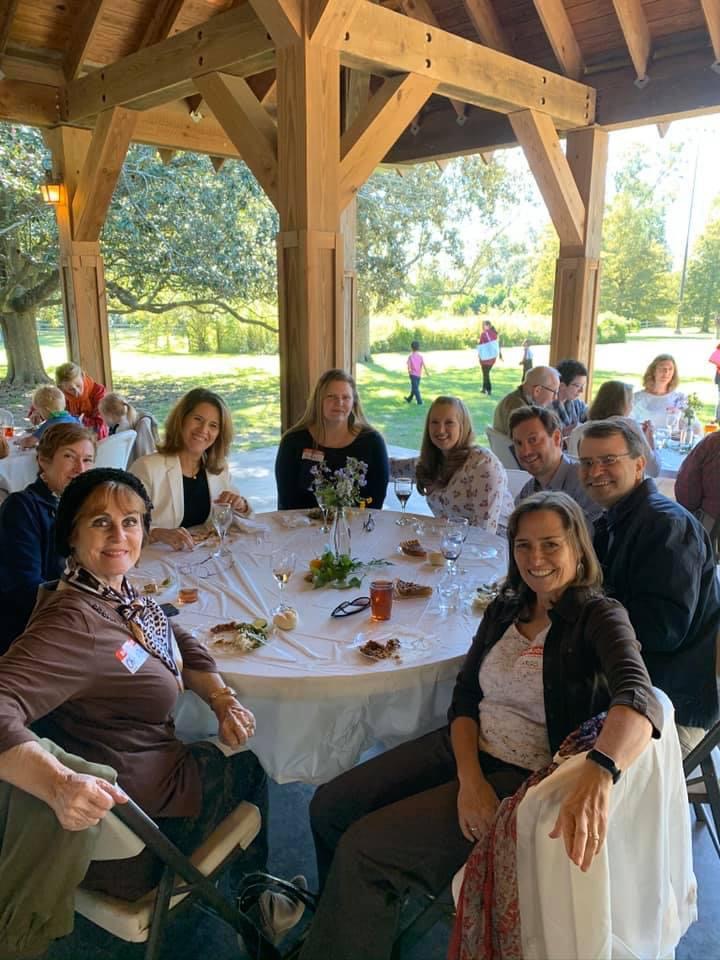 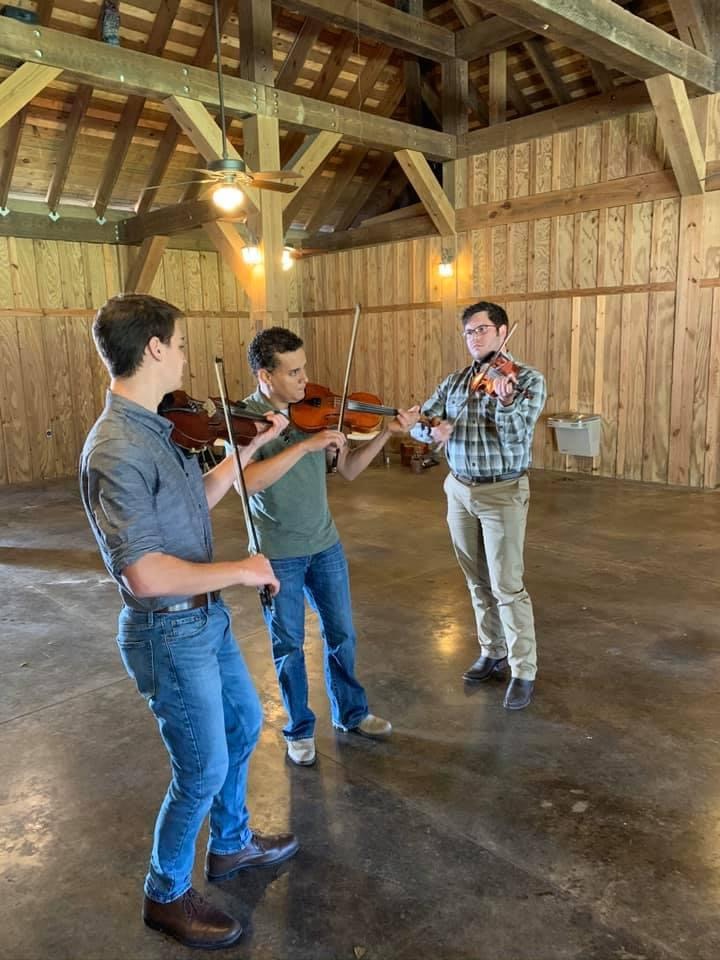 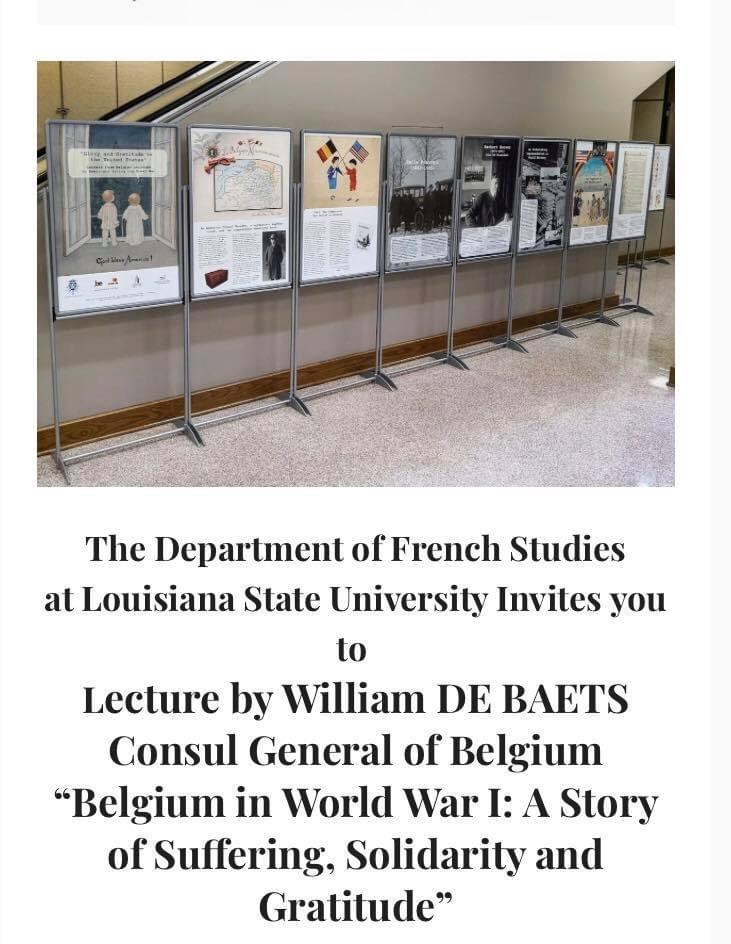 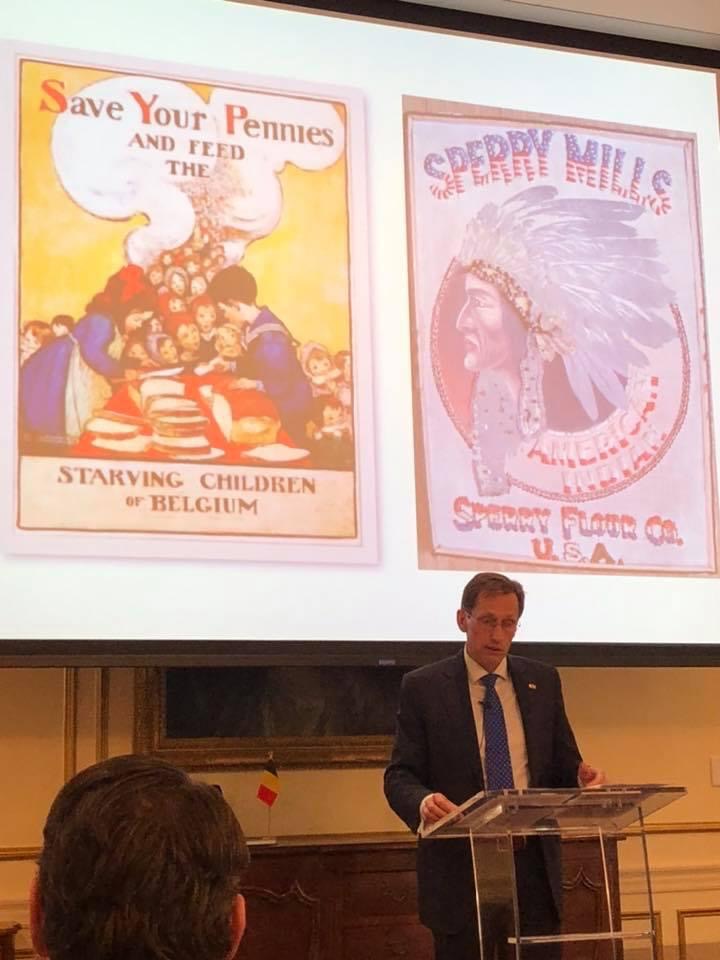 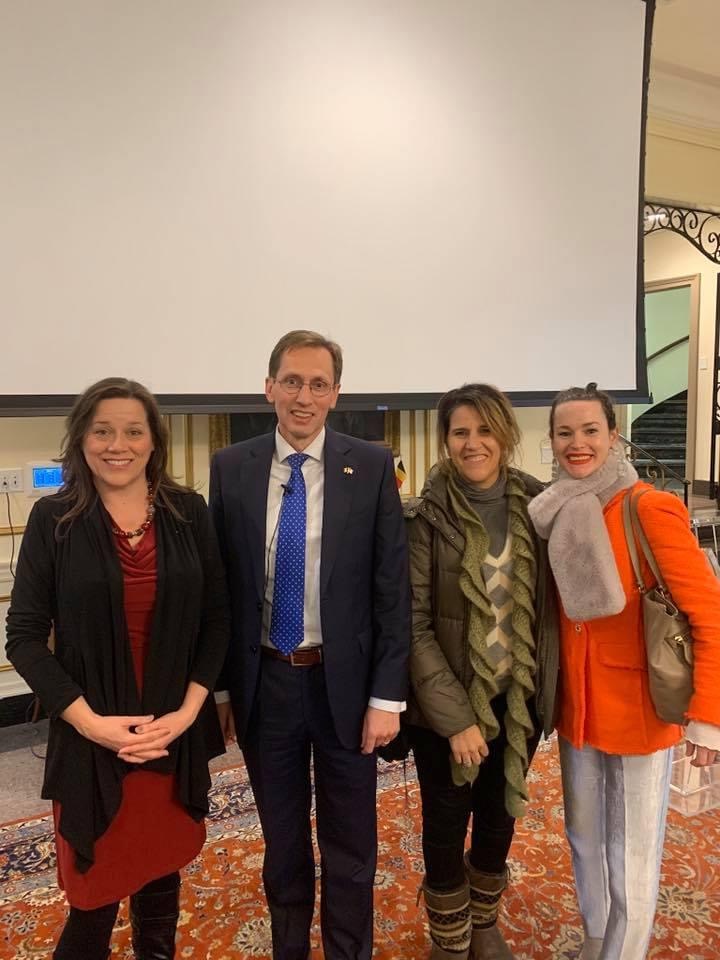 August 18, 2019
A Bastille Day Brunch (postponed due to a July storm) took place at Kalurah Street Grill.  The brunch was preceded by a mass in French led by Father Jason Vidrine.  Father Vidrine also shared stories of his experiences in France while researching his family roots.

April 30, 2019
Professor Jack Yeager of the LSU Department of French Studies, specialist in Francophone Literature, presented his recent translation and scholarly edition of Kim Lefèvre’s White Métisse, a moving memoir of childhood in Vietnam.  Light refreshments were served at his event held at Juban’s Creole Restaurant.

February 7, 2019
The Annual Meeting and Dinner was held at the Baton Rouge Country Club with FFS President Michael Vincent presiding.  The creation of La Société Louis Curet was announced, and new board officers and directors were elected.

November 11, 2018
Our annual Fête Champêtre was held at the French House and was followed by a special presentation under the oaks commemorating the 100th anniversary of Armistice Day.

January 24, 2018
The 2018 Annual Meeting and Dinner was held at The Club at Union Square on January 24, from 7:30-10:00 pm. It was preceded by a Cocktail and ceremony where the Consul Général de France in New Orleans Vincent Sciama awarded the badge of l’Ordre des Palmes Académiques to Chair of the French Department and outgoing President of the Friends of French Studies, Adelaide Russo. 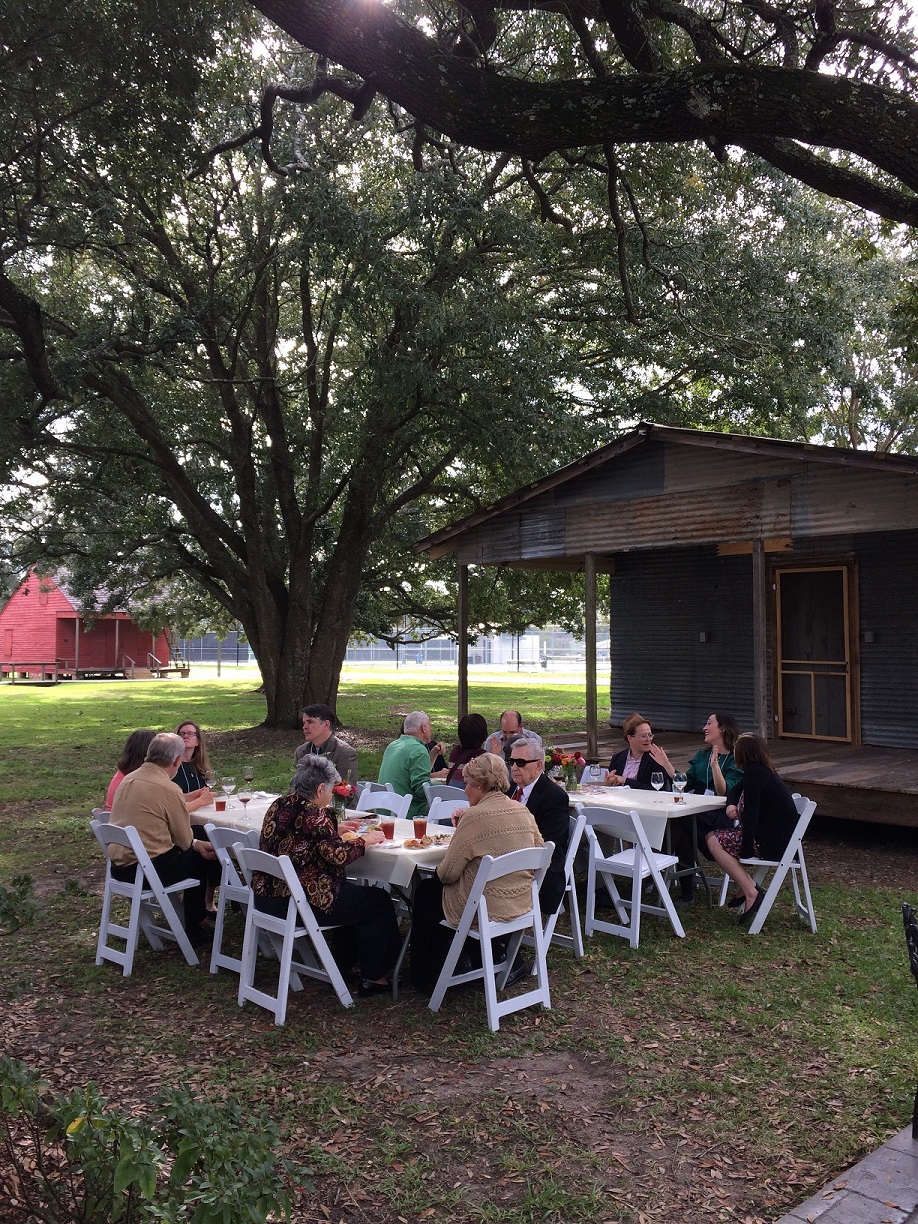 November 3, 2016
Friends of French Studies and L’Assemblée Française held the annual Fête Champêtre under the oaks at Antonia Plantation on River Road in Port Allen.

August 2, 2016
Friends of French Studies and L’Assemblée Française hosted a Bienvenue Fête at Galatoire’s to welcome Pierre de Pontalba.  It had been 50 years since a Pontalba was in Louisiana. 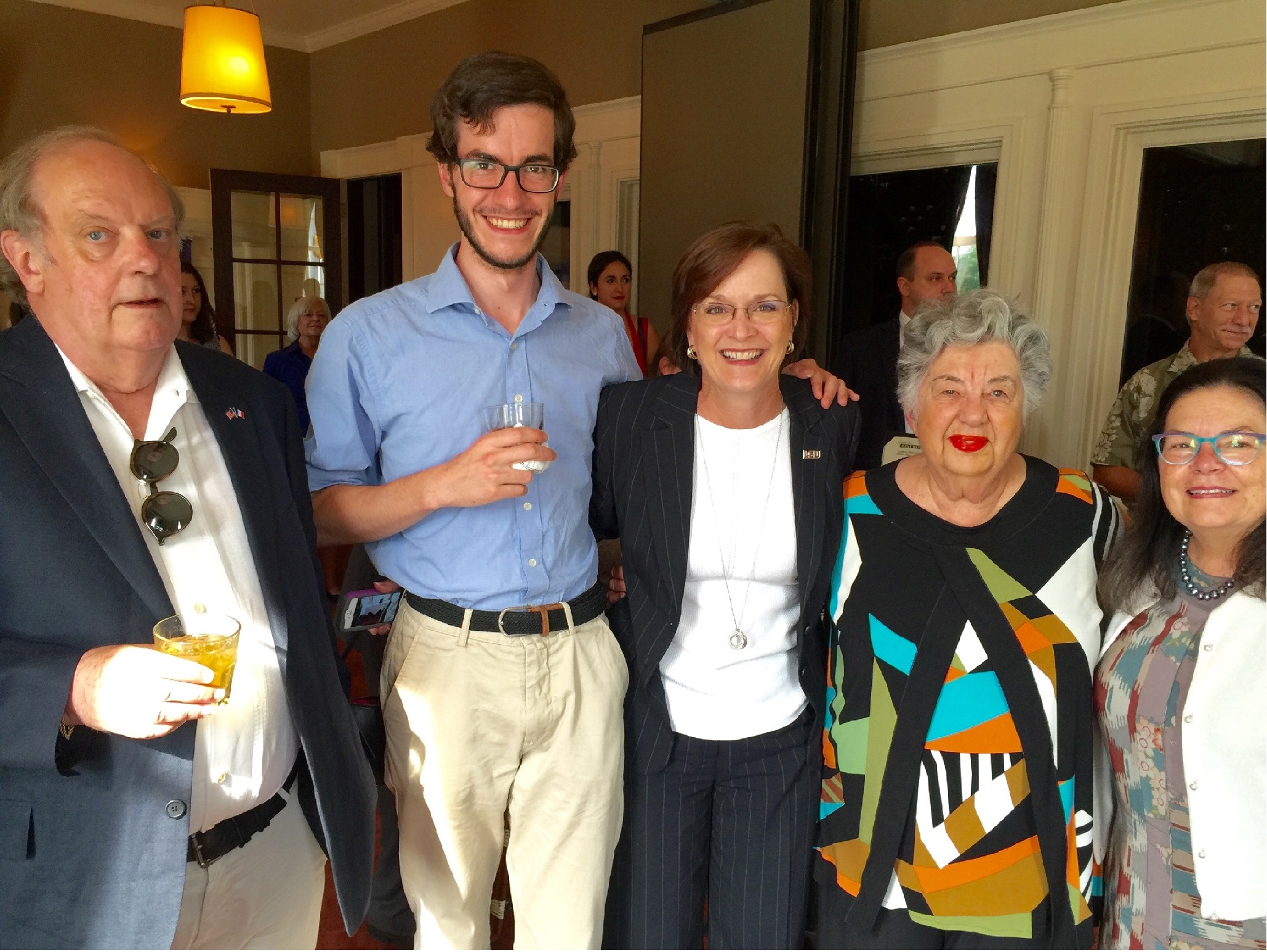 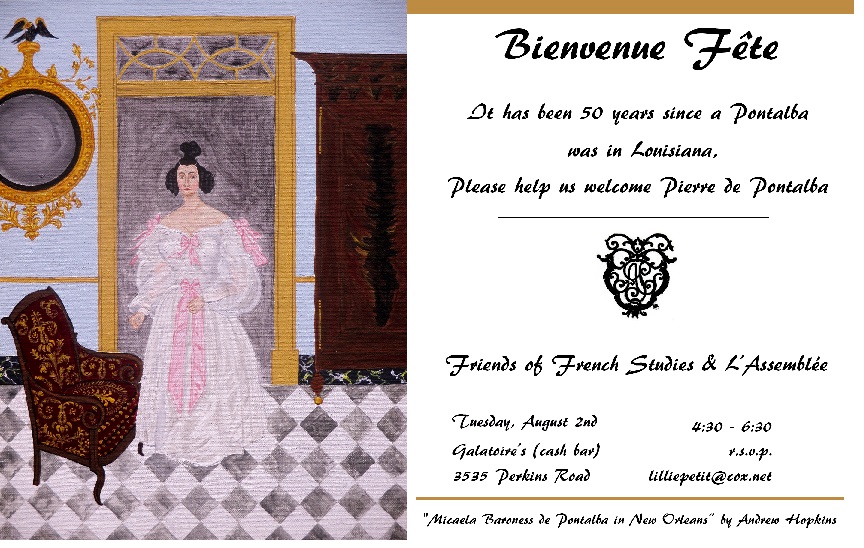 April 17, 2016
Friends of French Studies at LSU and the Center of French and Francophone Studies hosted an Interpretative Reading by author Fabienne Kanor 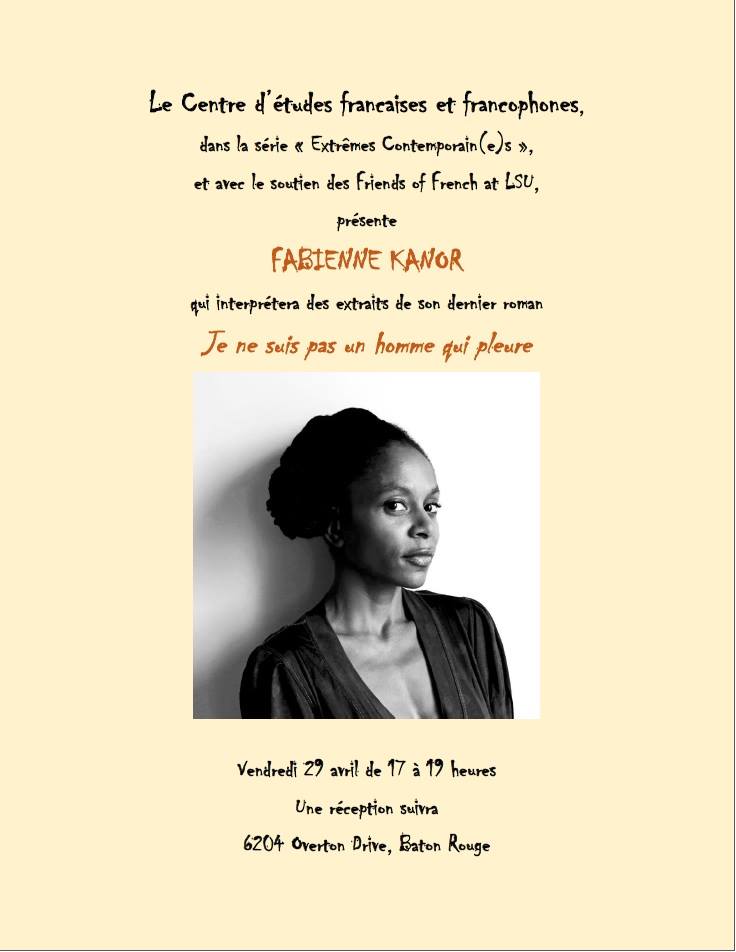 February 3, 2016
Our Annual Meeting and Dinner took place at the Baton Rouge Country Club.  Board 1st Vice-President Adelaide Russo presided as new officers and directors for the year were elected.

October 11, 2015
Friends of French Studies at LSU and L’Assemblée Française jointly hosted our annual Fête Champêtre at the home of David and Connie Norwood in St. Francisville on Sunday October 11, 2015 from 1 to 4 pm. 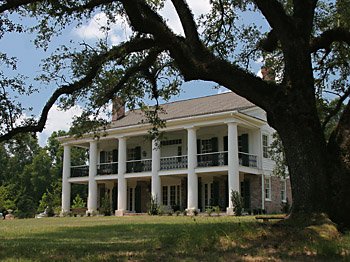 January, 2015
The Annual Meeting and Dinner was held at Baton Rouge Country Club.  Board President Neil Ann Parks led the meeting in which new officers and directors were elected. 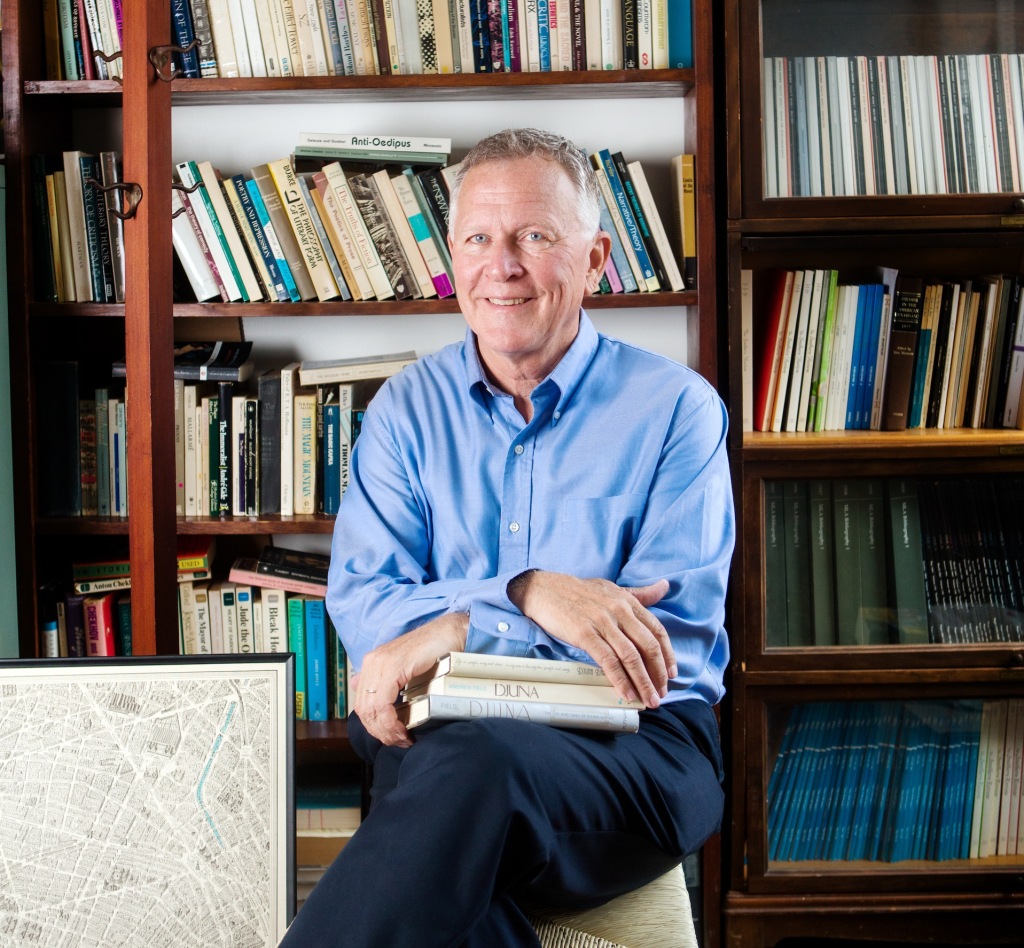 October 12, 2014
Friends of French Studies celebrated the annual Fête Champêtre at Lejeune House in New Roads, LA. Friends joined as we celebrated the beautiful Louisiana fall weather on the grounds of the unique Creole house, listed on the National Register of Historic Places and enjoyed the shade of the Samson Oak, a 300-year-old registered live oak. 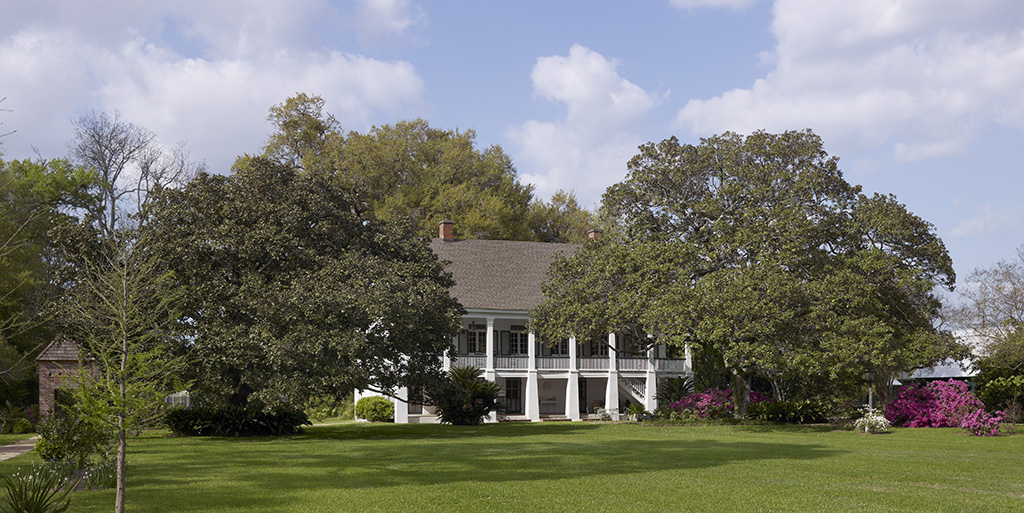