Dr.  Pradeep Kurup is a Professor in the Department of Civil and Environmental Engineering (CEE) at the University of Massachusetts Lowell (UMass Lowell). He was recently recognized as Distinguished University Professor, the highest accolade bestowed on a UMass Lowell faculty member, for his exemplary teaching, for nationally and internationally acclaimed research and for outstanding service to the university community and his profession. He was also awarded the CEE Department’s Teaching Excellence Award in 2002.

An expert in geotechnical engineering, Dr. Kurup’s research has earned him respect around the world. He is a recipient of the prestigious NSF CAREER Award (1999), and was also awarded the Civil Engineering Research Foundation (CERF) Career Development Award by the ASCE. He has been successful in obtaining research funds from Federal agencies totaling more than $3.5 Million. His scholarly work has covered a range of areas including, minimally invasive determination of engineering soil properties, evaluation of earthquake liquefaction potential, in-situ interpretation of contaminated sediments, and development of novel sensing systems for direct push technologies. He has developed novel testing devices, equipment, and interpretation methods that provide real-world solutions to industry and various agencies in the United States, including the Federal Highway Administration, Department of Defense, and the Environmental Protection Agency (EPA). Among his research projects funded by the NSF is the development of a novel electronic “nose” that can detect subsurface volatile organic compounds, and a novel electronic “tongue” that can detect and identify traces of toxic heavy metals such as arsenic, mercury, lead, and cadmium in soil and groundwater. These technologies have attracted the attention of the U.S. Environmental Protection Agency. He has two pending patents with the USPTO and PCT.

Dr. Kurup has authored/co-authored over sixty papers in peer reviewed journals and conference proceedings that are recognized for their rigorous publication standards. His publications are regarded highly worldwide have been cited in top refereed journals (such as the American Society for Testing and Materials, ASCE Journal of Geotechnical and Geoenvironmental Engineering, Sensors and Actuators, International Journal for Numerical and Analytical Methods in Geomechanics, Computers and Geotechnics, etc.), and in several conference proceedings.  He has delivered more than thirty five presentations (including keynote lectures, and a centenary seminar) at universities, symposiums, national meetings, and international conferences (in Japan, France, United Kingdom, Turkey, Malaysia, Canada, and India). 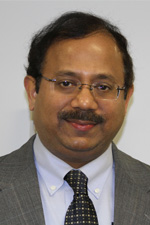