Bingham Cushman Stewart* was born in Cheneyville, Louisiana on February 24, 1905. He moved to Baton Rouge, where he attended Louisiana State University and received a Bachelor of Science Degree in 1926.

He worked for his father's construction company until 1932, when he became employed by the Louisiana Highway Commission. In 1936, he moved to New Orleans to work with W. R. Aldrich & Co., General Contractor, and in 1938, he was hired by Henry and Arthur Boh as general superintendent of Boh Bros. Construction Company.

In 1960, when Boh Bros. became incorporated in the state of Louisiana, Mr. Stewart was named Vice President and Director and served in that capacity until 1989, when he was named Vice Chairman of the Board of Directors. In 1998, Mr. Stewart celebrated his 60th anniversary with the company.

On November 17, 1993, Mr. Stewart was named to the Louisiana Highway Hall of Honor and was honored as an outstanding citizen for his involvement in the state, highway, street, bridge and transportation systems. 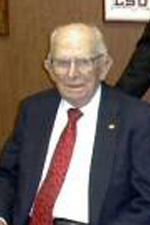