William Clifford Smith was born on April 21, 1935 in New Orleans, Louisiana. His wife is the former Jo-Anne Toups from Schriever, Louisiana, and they have seven children.

William Clifford Smith attended the public school system in Terrebonne Parish and received his Bachelor of Science Degree in Civil Engineering from Louisiana State University in 1958. Since he had grown up in his father’s footsteps in the civil engineering field, he immediately became a partner in his father’s firm, and the name was changed to T. Baker Smith & Son, to illustrate his formal entrance into the profession.

Following his father’s death in 1962, he reorganized and operated the company as President and sole owner. Today, he is Chairman of the Board of the cooperation.

The social, civic, and business organization of which he is a member include the Houma-Terrebonne Chamber of Commerce, Terrebonne Historical and Cultural Society, Board of Directors of Entergy Corporation, member of the Mississippi River Commission, and member of the Board of Regents. 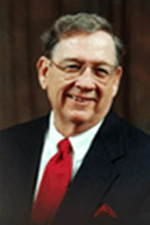