Sherri H. LeBas was appointed as Secretary of DOTD in June 2010 by Governor Bobby Jindal. LeBas is responsible for a more than $1.6 billion budget and works closely with federal, regional and local officials to ensure the citizens and businesses of Louisiana have the best infrastructure possible. Under her leadership, DOTD moved up seven places in road rankings by the Reason Foundation and has successfully obligated $430 million in American Recovery and Reinvestment Act federal funds.

LeBas is a professional civil engineer with more than 25 years in state service in Louisiana; working at the Department of Transportation and Development (DOTD) as well as the Division of Administration.

In February of 2010, Gov. Jindal named LeBas as DOTD's Interim Secretary, the first female to hold this position. Since the summer of 2008, LeBas served as Deputy Secretary overseeing the $600 - $800 million annual regular capital program, $430 million ARRA (federal recovery program), $1.4 billion state surplus program, legislative issues as well as managing day-to-day business at DOTD. In 2006 and 2007 LeBas served as the Assistant to the Secretary for Policy where she managed the state surplus program. Additionally, she educated public officials and stakeholders on transportation funding and worked to secure funds for priority projects.

In 2005, LeBas served as a facilitator for the DOTD Change Management Program, working with DOTD personnel and private industry to change or enhance the way DOTD conducts business. She assisted the TIMED program manager with the management of the $5 billion TIMED program. The TIMED (Transportation Infrastructure Model for Economic Development) program is the single largest transportation program in state history. The $5 billion improvement program includes widening 536 miles of state highways to four lanes on 11 project corridors, widening and/or new construction on three major bridges and improvements to both the Port of New Orleans and Louis Armstrong International Airport. The program is designed to enhance economic development in Louisiana through an investment in transportation projects.

While at the Division of Administration she managed the non-state entity program, which is funded through state capital outlay dollars. LeBas not only administered the program, but revamped it to ensure it ran as efficiently and effectively as possible and created standard guidelines to further guarantee the program's future success.

Throughout the years, LeBas has served as project manager on numerous projects at DOTD inclusive of I-49 in Shreveport, US 190 in Mandeville, US 90 interchanges in St. Mary Parish, US 165 and Ambassador Caffery extension in Lafayette. She worked closely with all levels involved in project development from designers and contractors, to executive leadership and legislative officials, to ensure a project is successfully constructed.

LeBas holds a bachelor's degree in civil engineering from Louisiana State University (1985) and is a licensed professional engineer in both civil and environmental engineering. She is a member of Association of State Highway and Transportation Officials (AASHTO), Chi Epsilon, American Society of Civil Engineers, and Louisiana Society of Professional Engineers in Civil Service. Additionally, she is the past secretary-treasurer of the Louisiana Engineering Society.

She has twice received the DOTD Secretary's Award of Excellence, DOTD's highest employee award. Additionally, she was a major participant on two teams that received national recognition for their success: Bronze 2006 National Partnership for Highway Quality (NPHQ) Making a Difference Award and the AASHTO ATA Award.

LeBas is very involved in the local community through her multiple volunteer positions. She is a sustaining member of the Junior League of Baton Rouge and in that role has worked on various project including FestForAll, Story Time, Junior Master Gardeners as well as serving as area advisor for two years. She is a member of the Catholic High Mother's Club and as such volunteers time at Catholic High and St. Aloysius. She is a past board member with the Woodstone Homeowners Association. LeBas is married to Michael LeBas and they have three sons; Andrew, Patrick and Michael. 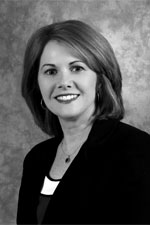