Ronald R.E. Hebert (“Ronnie”), President and CEO of Environmental Technical Sales, Inc. (ETEC),  received his B.S. in Civil Engineering from Louisiana State University in 1969. In 1996, Ronnie founded ETEC, a company specializing in the water, wastewater, sludge, and drainage industries.  ETEC’s main headquarters is located in Baton Rouge, Louisiana, with other locations in Jackson, Mississippi, Little Rock, Arkansas and Memphis, Tennessee. With over 46 years of experience in this field and in all aspects of engineering, from conception and design, project management, financing, construction, and operations & maintenance, Ronnie has been involved in thousands or projects valued in the billions of dollars. As President and CEO, Ronnie is responsible for all aspects of ETEC’S representation of over 100 national manufacturers.

Ronnie grew up in an “engineering” environment. His father, the late Roy A. Hebert (PE, PLS) was a LSU alumnus as well and co-founder of Hebert Brothers Engineers, General Contractors (their Louisiana contractor’s License was No.4!). In 1964, Ronnie graduated from St. John High School in Plaquemine, Louisiana. He served in the United States Army as Captain and as Company Commander of Company A, Louisiana Army National Guard 769th Engineer Battalion located in Plaquemine, Louisiana. After graduating from LSU in 1969, he completed the United States Army Engineer School in Fort Belvoir, Virginia.

Uniforms for Kids, Boys Town and the World War II Museum in New Orleans. In addition to his personal philanthropy, ETEC recently made a donation towards the refurbishing of the LSU Hydraulics Laboratory, which upon completion will be named Environmental Technical Sales (ETEC) Hydraulics Laboratory.  ETEC has also established scholarship funds for engineering students. 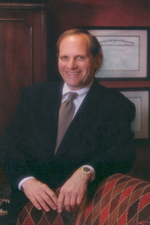