Robert A. “Bob” Deason, President and Chief Executive Officer of J. Ray McDermott, is a native of Natchitoches, Louisiana. He graduated from Natchitoches High School in 1963 and he attended Northwestern State College his freshman year. He then transferred to Louisiana State University as a chemistry major. In 1966 he left LSU and joined the U.S. Marine Corp. After serving a tour in Vietnam he returned to LSU and received a B.S. Degree in Civil Engineering in 1970. He also received an Executive MBA from the University of Michigan.

After graduation Deason joined Texas Eastern Transmission Company involved in development of natural gas and petroleum pipelines throughout the U.S. Between 1975 and 1985 he worked for several companies involved in engineering and project management for the upstream oil and gas industry. During this period he also served as the Deputy Project Manager responsible for Operating and Maintenance for the U.S. Strategic Petroleum Reserves.

In 1985 he joined Fluor, a major EPC contractor, helping develop their pipeline services business. During his 18 years at Fluor Bob had increasing responsibility in Fluor’s Upstream Oil and Gas business, their Chemical, Plastic and Fibers business, and their Refining and Petrochemical business.

He was responsible for numerous major EPC projects throughout the world. Since leaving LSU Bob has had responsibility for petroleum-related projects in many places around the globe. In addition to the US these include Nigeria, Ecuador, Colombia, Venezuela, China, Vietnam, Indonesia, Saudi Arabia, Qatar, Russia and Azerbaijan, just to name a few.

Bob joined J. Ray McDermott in 2003 returning to his offshore roots. J. Ray McDermott is a pioneer in offshore oil and gas development with strong roots in Louisiana. JRay was suffering through a period of poor project performance and disastrous financial results. The ability of this 60 year-old company to survive was in doubt.

After joining JRay Bob implemented strict controls and project management discipline. The organization was upgraded. During Bob’s tenure the company returned to its previous leadership position in the offshore industry with significant growth, with current revenue in excess of $3 Billion. Today JRay has significant operations in the U.S., Middle East, Asia Pacific and the Caspian and operates numerous offshore construction vessels around the world.

Deason is active in several industry related organizations and serves on the Boards of National Ocean Industries Association and International Pipeline and Offshore Contractors Association. He is a Registered Professional Engineer in Louisiana.

Mr. Deason is married to the former Dagmar Sauce also of Natchitoches and they have three children and five grandchildren. Bob and Dagmar reside in Houston, Texas. 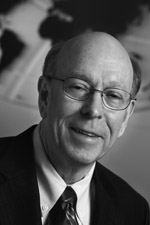