A native of Golden Meadow, Elvin Dantin* received a Bachelors and Masters Degree in Civil Engineering from LSU in 1949 and 1952 respectively. He then served the department as an assistant professor for 6 years, before moving west to pick up a Ph.D. from Stanford University. In 1962 he returned to his home state to resume his service to the LSU CEE Department, a career that would span for 30 years.

Dr. Dantin was one for the forward-looking faculty in the College. He not only found time to contribute to the fine undergraduate program that the Department is known for, but also broke new ground expanding the Department's research output. An early director of the College's Division of Engineering Research (1961-63), Elvin was the founding director for the Louisiana Water Resources Research Institute (1981-84). He laid taproots that nourished the young incoming faculty as the University made the difficult transition towards a Research I status. In 1984 he "retired", received a nice chair from the Department and moved to sunny Florida.

Retirement, hardly, Elvin then became a Founding Dean and set about the creation of the College of Engineering at the FAMU/FSU campus in Tallahassee. During a ten year period Elvin added the establishment of three ABET accredited departments, hired thirty faculty, and established approved Masters degree programs in four departments. Slowing down a bit, in 1993-94, Elvin settled back as chairman for the FAMU/FSU Department of Civil Engineering for over a year before finally accepting his second retirement. The college honored Elvin's contributions through the establishment of a Named Professorship (The Elvin Dantin Professor of Engineering) in his name. 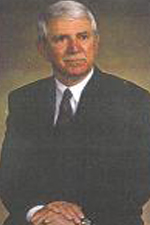