Verdi Adam is presently President and Principal of GEC, Inc., a comprehensive consulting firm based in Baton Rouge, Louisiana with offices in New Orleans, Jacksonville, Florida, Chicago, Illinois, and Lafayette, Louisiana. Since receiving his M.S. in civil engineering degree in 1954 from LSU, Mr. Adam has been involved in all phases of highway and transportation engineering. His career began with the then Louisiana Highway Department. Mr. Adam is an internationally recognized expert in the areas of paving and structural materials and pavement design with particular emphasis on asphalt pavements. He served as Chief Engineer for the Offices of Highways and of Aviation, director of Construction and Maintenance Division, and Materials and Research Engineering of the Department of Transportation of Louisiana.

Mr. Adam, in the 1960s, was one of the lead highway engineers in the country in the development, debugging and implementation of stochastic approach to end-result highway specifications. He has made numerous presentations in the United States and in several foreign countries, and he has assisted transportation departments of a number of states in developing statistically based quality assurance programs while reducing the need for manpower and unnecessary testing.

Mr. Adam established the Environmental Division at DOTD in response to the State and Federal environmental regulatory needs of highway design and construction. Beginning in the early sixties until early nineties, with the exception of a two year break when he was in Washington, Mr. Adam taught the highway engineering course for the Department of Civil Engineering at LSU as an Adjunct Assistant and later as an Adjunct Associate Professor. In 1982 he was appointed to the Louisiana Board of Registration for Professional Engineers and Land Surveyors by Governor Treen for a six year term. He served as a member and Chairman of the Board.

Verdi Adam has won awards such as the Louisiana Highways and Transportation Hall of Honor in 1998. He has also been awarded the Industry Recognition Award, which is given for his outstanding contributions to the asphalt pavement industry during 1970 in recognition of development of statistically based end-result specifications for asphalt pavements, which are now nationally implemented, and development of concepts and specifications for the use of consistency at service temperatures for asphalt cements.

Mr. Adam has been very active in research organizations and professional associations and has written many research papers, reports and articles. He has served as Vice-Chairman of the Highway Transport Subcommittee and Chairman of the Bituminous Materials Technical Section of the American Association of State Highway and Transportation Officials. 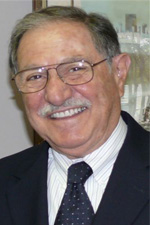