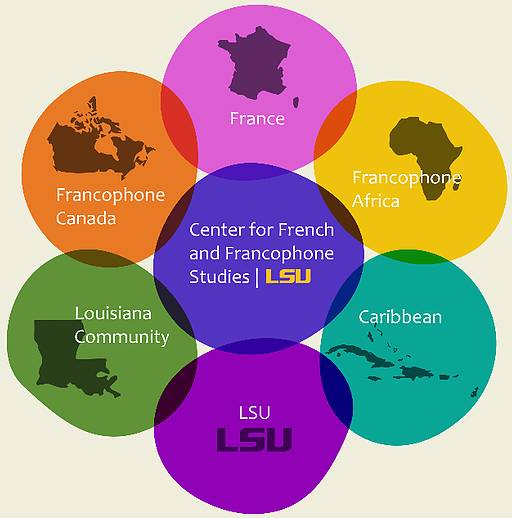 The Center for French and Francophone Studies is designated as a Center of Excellence by the French Embassy in New York.

The mission of the Center is to federate and encourage the development of French and Francophone culture in its multifaceted aspects, with particular emphasis on literature and the arts.

This mission can be visualized as a series of concentric circles growing larger and larger.The first circle encompasses all members of the LSU community that have an interest in French: scholars who study French culture in all departments, International Programs, the Office of Research and Development, the LSU Rural Life Museum, LSU University Press.

The second circle encompasses the Baton Rouge community, including the Friends of French at LSU, to which the Center proposes a series of events, the Louisiana Museum of Art, Whitney Plantation and other institutions.

The third circle aims to federate French and Francophone culture interests in the State of Louisiana, including all its higher education institutions.

Lastly, the fourth circle focuses on international relations with France, Canada, Francophone countries in Europe and Africa, and the French Antilles.

The Center will accomplish its goal by fully or partially sponsoring colloquia, lectures and events congruent with its mission. It will seek internal and external funding to support all of its activities on a continuous basis.