Some species are threatened or endangered. Learning more about animals and their habitats is an important step in the process of conservation. The Louisiana’s Past exhibit consists of three dioramas that will help you learn more about vanishing habitats.

The Rockies Above Timberline 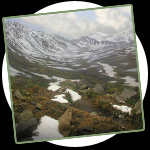 Who has been in the mountains before?

There are two ways to get to a colder climate. One is to travel towards the poles; the other is to go upward.

The thermometer drops roughly one degree Fahrenheit for every 100 feet we ascend, about as much as traveling 100 miles closer to the North Pole. Changes in temperature result in changes in plant and animal life. The few species that thrive in these cool heights are wonderfully adapted to their surroundings.

This habitat diorama displays a mountain valley in Colorado in August at about 9000 feet. At this height, there are few trees because of the cold, long winters and the winds. The growing season in these areas is very short and spring flowers first bloom in June. Animals and plants must adapt to these very cold environments to live. Plants grow close to the ground because this enables them to retain more heat. Many lichens grow on the rocks here and prosper in these cold conditions. Animals rely on thick insulation, such as the Ptarmigan, which even has feathers covering its toes in the winter. The pika stores food in its home during the short summer so that it can survive the winter, and the yellow-bellied marmot hibernates all winter.

The Ptarmigan has white feathers in the winter and gray-brown feathers in the summer. This animal even has feathers covering its toes in the winter;
The Pika dries grass on rocks, then stores the grass in its home under the rocks to use as food during the winter;
The Yellow-bellied marmot lives in underground tunnels and hibernates up to nine months during the winter;
The Long-tailed weasel lives in burrows or hollow logs and keeps warm by insulating its home with fur from its victims;
Did you know that as you go higher up a mountain, the air gets thinner and the temperature drops?

Some of these animals change colors from summer to winter – how does this help them?
Why do you think there are not many snakes and lizards living in these areas? Hint: think about ectothermic versus endothermic.
What are the similarities between this habitat and the desert that are different from the rain forest? 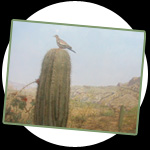 This habitat diorama represents an area of desert in Arizona.

Deserts generally receive less than 10 inches of rain a year, which means that plants grow very slowly here, as compared to the tropical rainforest. For instance, the saguaro cactus takes more than 60 years to reach a height of 10 feet.

Deserts are not only dry, they are hot as well, with extremely hot day temperatures, but it often can get quite chilly at night. In order to survive in such dry, hot habitats, the plants and animals that live here have many adaptations.

Cacti look swollen because they store water for use during dry periods. To protect their water they have sharp thorns.

The Gila Woodpecker, however, drills holes in the giant saguaro and builds a nest where its young are protected by the spines of the cactus. Desert animals try to beat the heat by resting during the day and feeding at night. They are often beige-colored for camouflage protection to help blend in with the environment and to keep cool.

Birds in deserts have an advantage because they can fly to water sources; other animals have developed way to get the water they need from the plants and insects they eat.

The Sidewinder Rattlesnake has developed a unique sideways locomotion because of its sandy environment. Most snakes use their belly scales to grip the surface and move across it, but this doesn’t work very well on sand. Sideways movement is more efficient for this environment for the snake.

Another desert resident, the Gila monster, is one of only two venomous lizards in the world (the other is the Mexican beaded lizard). It can grow to be one and a half feet long! They are more likely to hide from you than bite you, however, and should not be feared.

Short Facts
The Gila Monster has a coloration that warns predators of its poisonous bite;
The Gila Woodpecker drills holes in the Saguaro cactus for nesting. The needles in the cactus provide protection from predators for its young;
The Phainopepla has special sacks in its throat that hold mistletoe berries. These sacks are used to separate the seed from the soft part of the berry. The seeds are then spit out, allowing new plants to grow.
Teacher’s Corner
Ask your children or students questions such as:

Why is the Gila Monster brightly colored instead of camouflaged?
Residents of the desert are often smaller than in other habitats – how might this help them?
What would you need to do to be able to survive in the desert?

At the Edge of the Rainforest 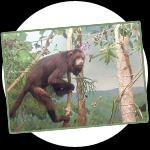 This diorama represents a scene that you might see as you begin to enter a rainforest in Honduras.

Most of the tropical rainforests today are located along the equator, but some extend as far as the Tropic of Capricorn and the Tropic of Cancer. Temperatures in the rainforest stay warm and the environment is wet throughout the year, these factors encourage fast growth. Rainforests also contain so many trees that only a small amount of sunlight can reach the forest floor, which restricts smaller trees and shrubs from growing there. This habitat supports the most diverse variety of plants and animals on the planet and may prove to be important in future medical technology or in dealing with world hunger.

Museum researchers often travel to regions such as these because many of the plants and animals have never been described before, and some of the new plants discovered from the tropical rainforests are being explored as possible sources of new medicines. Unfortunately, these areas are also suffering from deforestation as all the trees are cut down to clear the way for agriculture. Ironically, however, the soil here is very infertile and can only support crops for a few seasons, after which the area is abandoned.

Did you know that, back when the earth’s climate was warmer, the rainforests existed as far north as Louisiana. You could have seen this remarkable habitat in your own backyard!

Ask your children or students questions such as:

MIKE THE TIGER:
A ROARING HISTORY