The LSU SVM Veterinary Teaching Hospital operated its intensive care unit 24/7 at near capacity and, at times, over capacity to accommodate animals affected by Hurricane Katrina. A secondary ICU was set up to handle these additional cases, many of which the hospital treated at its own expense.

Ward 1 was designated a secondary or step-down ward for hurricane pets. The creation of a secondary ward became necessary when the small animal ICU reached capacity. This step-down ward (so called because it provided care one step below that offered in the ICU) was staffed by volunteer veterinarians and technicians from all across the country and was run by Dr. Mark Neer, then small animal section chief.

The Hospital’s small animal ICU has 38 cages and six runs for large dogs; the secondary ward has 24 cages. The aftermath of Hurricane Katrina was felt for several weeks rather than days, and at the height of the disaster, all of the hospital’s cages were full. The ICU normally sees about 12 cases each day. After Hurricane Katrina, the caseload jumped to 30-40 cases per day.

“The magnitude of this storm was amazing; the problems just kept getting larger and larger,” said Dr. Dennis McCurnin, then director of the Veterinary Teaching Hospital.  “In the beginning, infrastructure was the main problem.  There was no procedure for coordinating volunteers or supplies, and offers to help were coming in from everywhere.”

In order to meet the new demand, hospital staff worked 12-hour shifts. The ICU usually schedules one technician for evenings, but the additional patients required two or three technicians per night. Additional veterinarians were also needed, especially because some of the hospital’s clinicians were reassigned to the animal shelters at the LSU AgCenter’s John M. Parker Coliseum and the Lamar-Dixon Expo Center.

“We learned that we can handle many more cases,” said Dr. McCurnin.  “We also learned what ‘busy’ really means, and our faculty, staff and students adjusted to the increased caseload very well.”

Hurricane pets primarily came to the hospital from the animal shelters, but some were brought in by their owners. 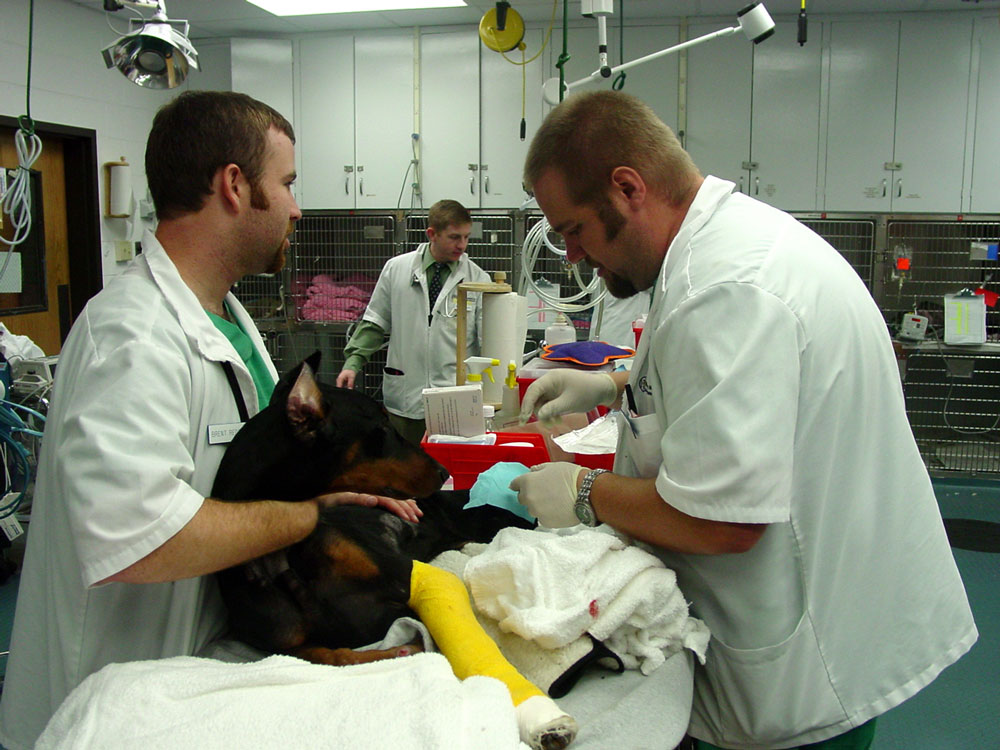 Two Doberman Pinschers, Valentino and Diva, were on their own for 16 days before their owner could get into New Orleans to rescue them.  Diva was fine, but Valentino, who was only 6 months old at the time, was dehydrated and undernourished and had several pressure sores that required extreme care.

According to Dr. Mark Acierno, professor of companion animal medicine, Valentino is a “miracle dog.”  Dr. Acierno added, “Valentino had to be decontaminated because he had been lying in flood waters.  We weren’t sure if he would survive the decontamination.  It was a collaboration between medicine, dermatology and surgery that saved him.” 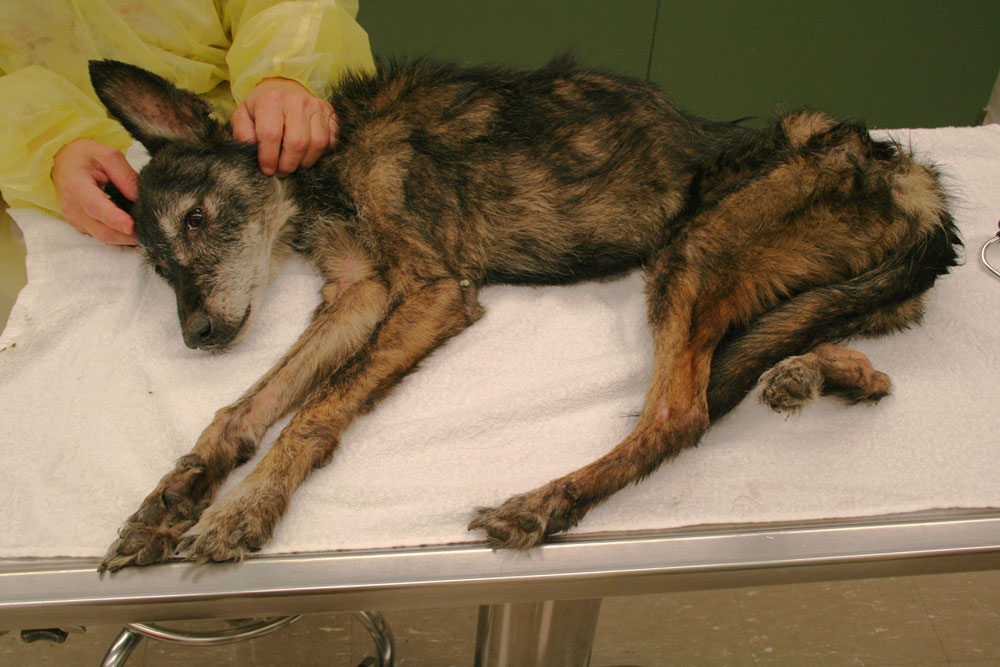 Kelsie, an 11-year-old mixed breed dog, is another “miracle dog.”  She was on her own for five weeks in a flooded house with no food.  She was treated by the hospital for starvation and dehydration and is currently being fostered by one of the hospital’s residents until her owners can take her.

Kelsie’s owner Danielle and her her then 4-year-old daughter Maighan visited Kelsie at the hospital.  “We left her with food and water in her room, but she was found in my bedroom on top of two mattresses and a box spring.  The door was wedged shut, and she couldn’t get out to get to her food,” said Danielle.  “My mother and sister rescued Kelsie and brought her to the School.  We are so happy to see her . . . .It’s a true blessing that she survived.” 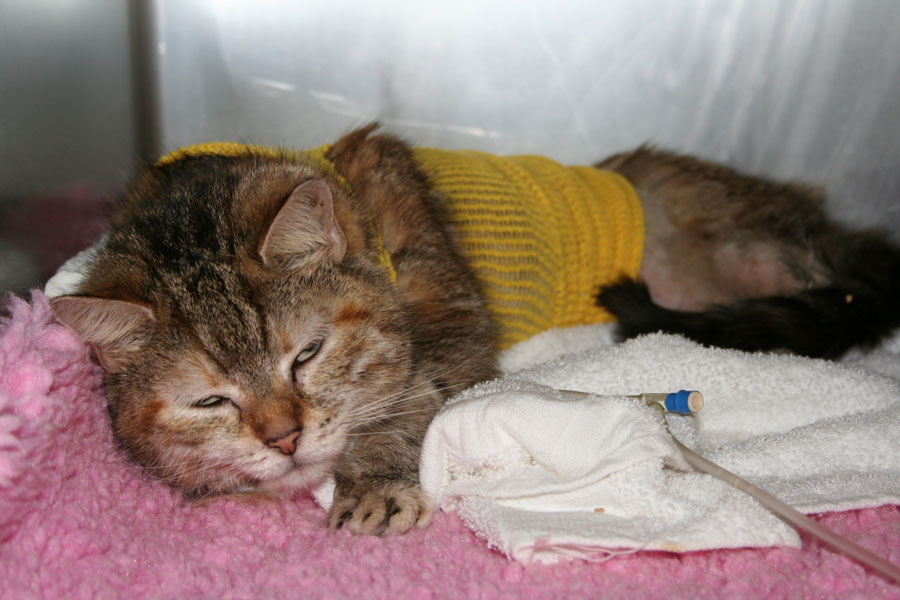 The School was also the site of some pet reunions. Muffin was a 10-year-old cat rescued by a humane organization. She was initially taken to an animal shelter but was sent to the School’s hospital after an exam by one of the shelter veterinarians. Dr. Stephanie Smith, a volunteer veterinarian from Illinois, was working in the step-down ward and diagnosed Muffin with hepatic lipidosis (fatty liver syndrome). This disease is a result of stress and starvation. Dr. Smith and her sister (a physician who also volunteered at the hospital) found Muffin’s owner on the www.petfinder.com website and contacted her, and Muffin was reunited with her owner. 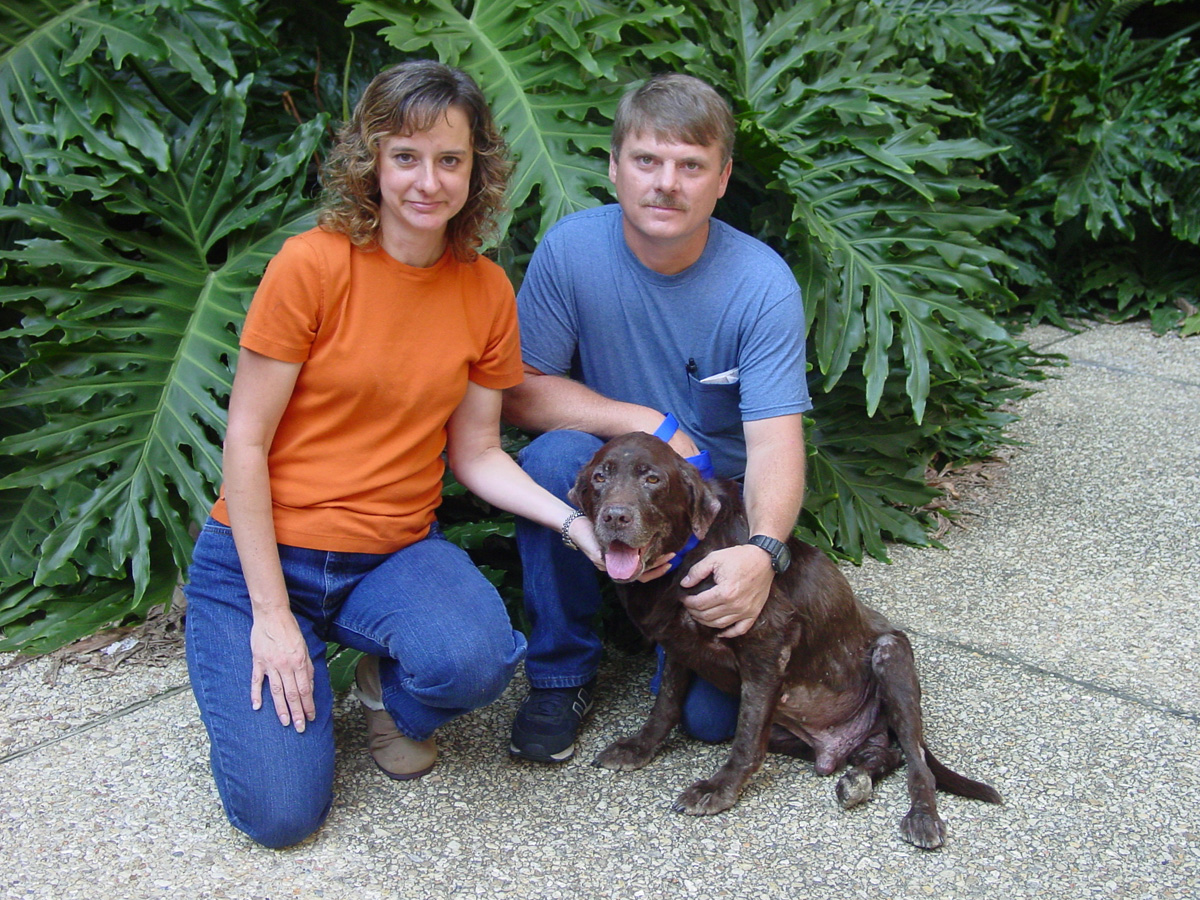 Connie and Andrew looked for their dog on-line following Hurricane Katrina. Hershey Kiss, a chocolate lab, had been brought to the Veterinary Teaching Hospital from one of the state’s animal shelters and was treated for a skin condition possibly due to exposure to chemicals in the water in Chalmette, La.  Hershey had been at the hospital for a few weeks before her owners received a call from a friend letting them know that their dog was at the School.  “We didn’t evacuate until the Friday after the storm. We didn’t want to leave the dogs. That’s the main reason we didn’t leave right away,” said Andrew. Hershey was reunited with her owners on October 20, 2005.