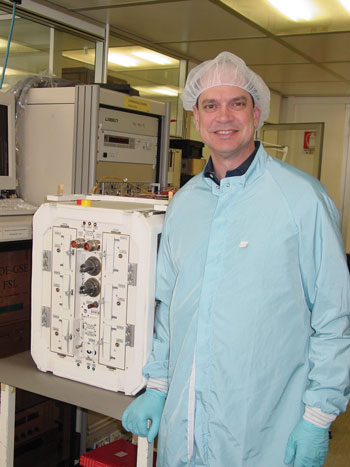 In addition to his DVM, Dr. Alex Dunlap received an MD from the University of Tennessee in 1996, and he is a Diplomate of the American College of Family Physicians. Following graduation from LSU, Dr. Dunlap worked in a mixed animal practice in Collierville, Tenn., for three years. He then embarked on medical school and was selected to go into astronaut training during his senior year. He was a payload specialist in the astronaut corps from 1996-1998. In 2000, Dr. Dunlap finished his two-year residency and began working in emergency medicine as a physician at St. Bernard’s Regional Medical Center in Jonesboro, Ark., a position he still holds. In 2001, he became chief veterinarian for NASA. His office is in Washington, D.C., so he commutes and telecommutes when necessary. As chief veterinarian, Dr. Dunlap is responsible for all NASA policies related to animal health and welfare. In March 2009, he trained two Italian astronauts going to the International Space Station to work with research mice on the station. He also reviewed the Institutional Animal Care and Use Committee (IACUC) protocol for this research project. He made several trips to Italy to work with the astronauts and worked as a liaison between the Italian scientists and NASA. “For me, it was important to follow my dream of working with NASA. When I was in school, I told people this was something I wanted to do, and I’m sure my classmates thought I was crazy. It doesn’t happen by itself; you have to make it happen. That’s what I did by being persistent and knowing this is what I wanted.” 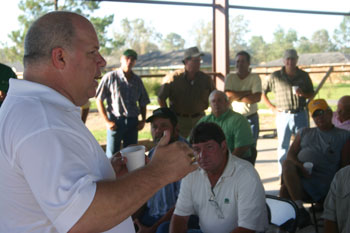 Dr. Strain’s journey to his current position began in July 1999 with a successful run for the Louisiana House of Representatives as representative of District 74, a position that he held from October 1999 until January 2008, when he was sworn in as commissioner. In July 1999, there came an opportunity to run for state representative. “I felt I could better serve veterinary medicine and farmers as a policy maker,” said Dr. Strain. So, after seven years as a state representative, he successfully ran for Commissioner of Agriculture & Forestry. “Agriculture is a $27.8 billion per year industry in Louisiana, and I am its chief steward, a position I take very seriously,” said Dr. Strain. “As stated in the Constitution, Article IV, Section 10, my responsibility is to head the department and exercise all functions of the state related to promotion, protection, and advancement of agriculture. I am also responsible for water conservation, weights and measures, and animal health.” Dr. Strain oversees over 900 employees and a budget of $102 million of direct funding. 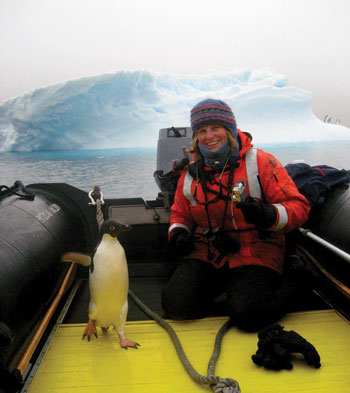 Dr. Walton has been leading natural history trips for over 28 years to many different areas in the world. She grew up in Panama and attributes this to her early love of the tropical rainforest. She received a BS in zoology from LSU before starting veterinary school.
After receiving her DVM, Dr. Walton had a relief practice for a few years, then worked on a diabetes research project. She eventually moved to Ecuador and lived and worked in the Amazon rainforest, where she oversaw the building of a scientific research station and was co-director of the station for five years. In 1999, she moved back to the U.S. and started her own wildlife tour company.
Through Carol Walton Expeditions, Dr. Walton organizes and guides wildlife tours all over Africa, South America, the Arctic and Antarctica, teaching people about nature and the wildlife that lives there. She also works on Expedition cruise ships as a lecturer, naturalist, and zodiac driver. Last year, Dr. Walton organized a continuing education conference for veterinarians to Antarctica for the North American Veterinary Conference (NAVC). “I will be doing more trips for the NAVC (the next one is this fall to see polar bears in the arctic), and after that to the Galapagos Islands next summer,” she said. “I’m also working with LAVC (the Latin American Veterinary Conference), both lecturing at their conference in Lima, Peru, and guiding a post-conference trip to the rainforest.” 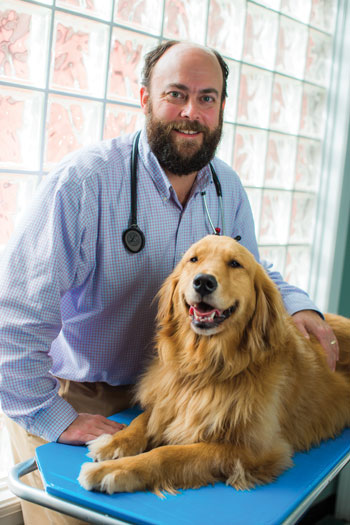 Dr. Daters graduated from vet school in 2004 (he also completed a Master’s in Veterinary Physiology, Pharmacology, and Toxicology in the summer between second and third year) and finished an internship in Small Animal Medicine at Colorado State University in the summer of 2005. He returned to the LSU SVM for his residency in Small Animal Medical (Oncology) and completed that in the summer of 2007 and is board certified in the American College of Veterinary Internal Medicine-Oncology. He worked at a specialty clinic in New Orleans until the summer of 2011 and then joined a satellite clinic of Southeast Veterinary Oncology and Internal Medicine, in Savannah, Ga. In February 2016, he purchased the Savannah portion of the clinic and became the owner of Coastal Veterinary Oncology. "I see the LSU SVM as the primary contributor to my education and what makes me the veterinarian I am today. I spent a total of seven years there when you combine veterinary school, my Master’s program, and residency. That is longer than I spent at my high school and college! I use knowledge and training I received at LSU daily and would be a completely different person and veterinarian (and definitely not as good) had I attended any other veterinary school." 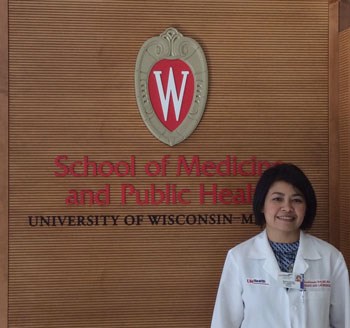 Originally from Asansol, West Bengal, India, Dr. Roy received her PhD from the LSU SVM in May 2007 from the Department of Comparative Biomedical Sciences (CBS). Her dissertation was entitled, “Role of Heparanase and Heparanase-degraded Heparan Sulfate in Brain-metastatic Melanoma,” and her major advisor was Gary Wise, PhD, professor emeritus and then head of CBS. In September 2003, Dr. Roy, who was then working towards her PhD, placed third in the PhD category at the LSU SVM’s Phi Zeta Research Emphasis Day for her project entitled, “Antisense-mediated Suppression of Heparanase Gene Inhibits Invasion by Brain-metastatic Melanoma Cells.” Dr. Roy pursued a postdoctoral fellowship and then worked as a research scientist/associate researcher to further study regulation of angiogenesis and cancer metastasis. Currently, she is in a residency training program in pathology at the University of Wisconsin Hospital and Clinics. "We are entering the era of precision medicine. As a physician-scientist, my goal is to conduct translational research and apply the knowledge of molecular biology, combined with cancer genetics, to improve patient care." 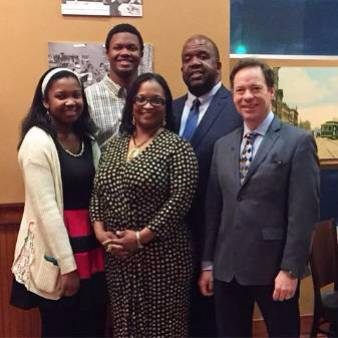 Dr. Daniels received his DVM from the LSU SVM in 1986. He practiced veterinary medicine for 18 months and started his PhD in epidemiology before beginning his career in laboratory animal medicine. Since then, he has had an extremely successful career as the attending veterinarian and director of laboratory animal medicine at the University of North Texas Health Science Center in Fort Worth, Texas, where he has led this department for over 25 years. He is also the attending veterinarian for Texas Woman’s University, the University of Texas at Dallas, the University of Texas at Arlington, Texas Christian University, the University of North Texas and the Baylor Research Institute. Dr. Rhonda Daniels, Egeenee’s wife, received her DVM from the LSU SVM in 1990, and his brother, Dr. Shawn Daniels, received his DVM from the LSU SVM in 1994. Egeenee and Rhonda have two children, A.J. (18) and Endrea (16). Dr. Daniels has served as a volunteer for Big Brothers/Big Sisters of America and the Fort Worth Zoo and currently volunteers for his church and for Resurrection III (Aid for Recovering Drug Addicts and Homeless). He was named to Who’s Who in Veterinary Science and Medicine in 1992, received the Southern University’s Distinguished Alumni Award in 1998 and has written many publications directly related to his profession. Dr. Daniels received the 2015 LSU SVM Distinguished Alumnus of the Year Award. 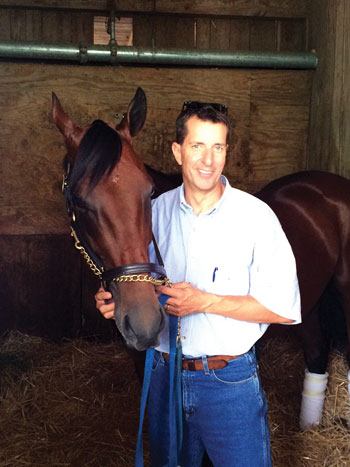 Dr. Dunlavy started working with American Pharoah when he arrived at Churchill Downs prior to the 2015 Kentucky Derby. Dr. Dunlavy's normal routine is checking with the Baffert Stable daily, so he saw Pharoah almost every day. After winning the Kentucky Derby, Bob Baffert continued to use Churchill Downs as his training base so Dr. Dunlavy continued to monitor American Pharoah throughout American Pharoah's Triple Crown campaign. "I have been in equine practice since graduating. Since 1996 my home base has been Louisville, Ky. I am currently the managing partner for Kentucky Equine Medical Associates. There are six veterinarians in the group, and we service clients in Kentucky, Indiana, Arkansas and Louisiana. I have and continue to be an active member of AAEP serving as a committee member and on the 'On Call Team.'" 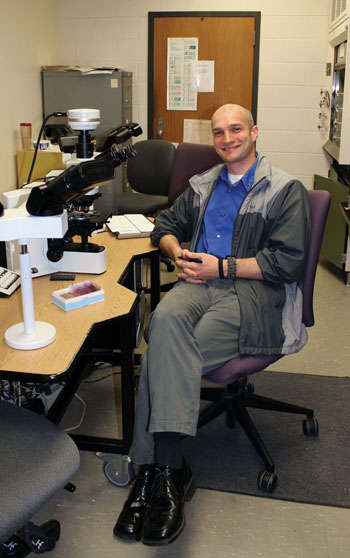 Dr. Grasperge is on clinics 50 percent of the time, which involves overseeing routine CBC, serum chemistry and urinalysis assays, along with evaluation of cytology samples. He also teaches veterinary clinical pathology to the second- and fourth-year students while mentoring two veterinary clinical pathology residents. He is also a facilitator for the first- and second-year Problem-based Learning courses. I’ve been on the Scholarships and Awards committee and the Admissions committee and is currently serving as the chair of the Admissions committee. He also teaches advanced clinical pathology rotations for the internal medicine and surgery residents for both the small and large animal services. He works collaboratively with the Vector-borne Disease Laboratory within the LSU SVM on research projects and with the Embers Laboratory at the Tulane National Primate Research Center. He recently became more involved with his specialty college, where he served as a proctor for the American College of Veterinary Pathologists certifying examination.