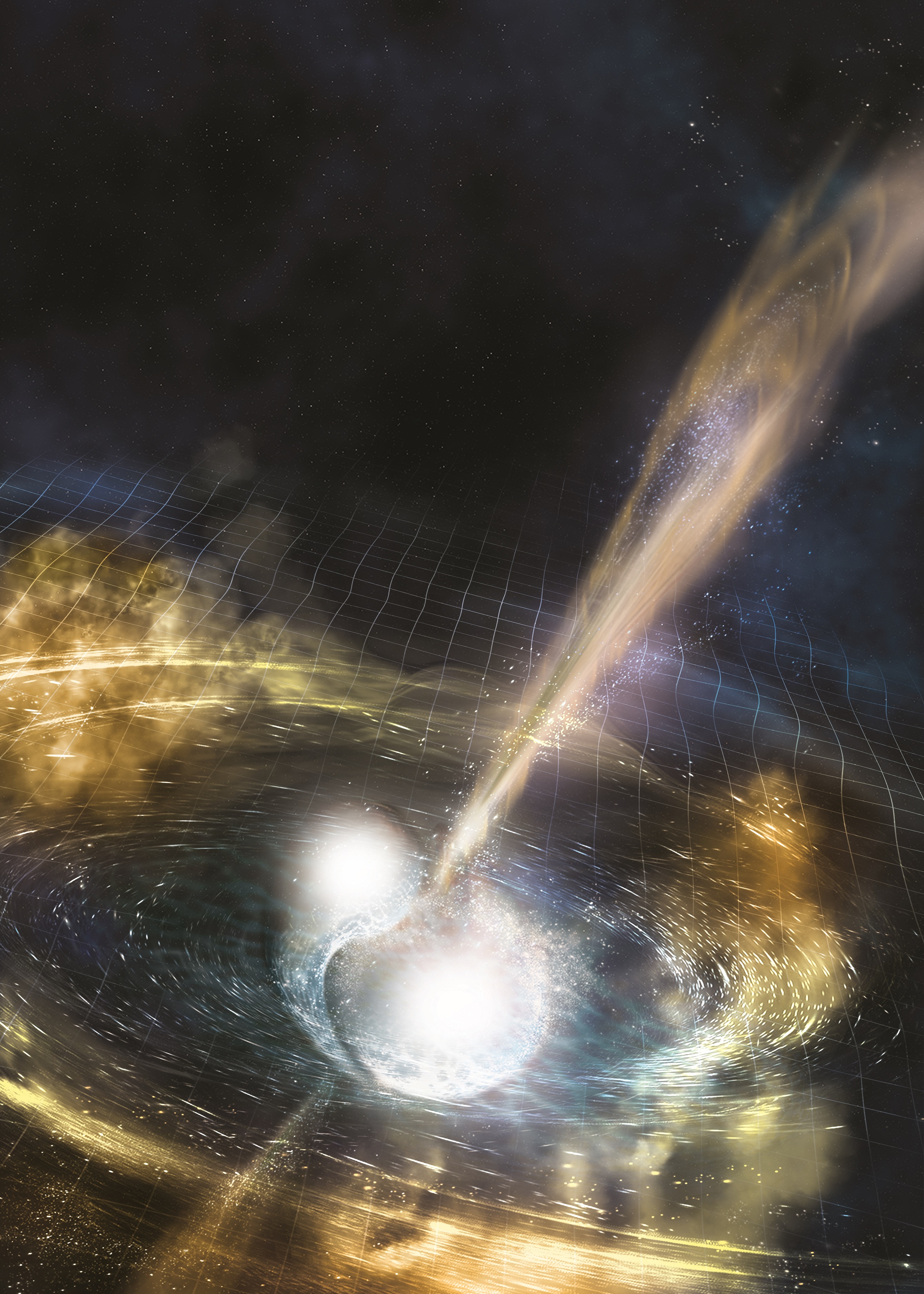 Artist’s illustration of two merging neutron stars. The rippling space-time grid represents gravitational waves that travel out from the collision, while the narrow beams show the bursts of gamma rays that are shot out just seconds after the gravitational waves. Swirling clouds of material ejected from the merging stars are also depicted. The clouds glow with visible and other wavelengths of light. Image Credit: NSF/LIGO/Sonoma State University/A. Simonnet

The discovery was made using the U.S.-based Laser Interferometer Gravitational-Wave Observatory, or LIGO; the Europe-based Virgo detector; and some 70 ground- and space-based observatories.

Neutron stars are the smallest, densest stars known to exist and are formed when massive stars explode in supernovas. As these neutron stars spiraled together, they emitted gravitational waves that were detectable for about 100 seconds; when they collided, a flash of light in the form of gamma rays was emitted and seen on Earth about two seconds after the gravitational waves. In the days and weeks following the smashup, other forms of light, or electromagnetic radiation — including x-ray, ultraviolet, optical, infrared and radio waves — were detected.

“This first observation of gravitational waves caused by two neutron starts colliding is not only a breakthrough for the LIGO-Virgo Scientific Collaboration that detected this, but also for our colleagues who study neutron stars, gamma-ray flashes and other astronomical phenomena,” said Gabriela González, LSU Department of Physics & Astronomy professor and former LIGO Scientific Collaboration spokesperson.

Approximately 130 million years ago, the two neutron stars were in their final moments of orbiting each other, separated only by about 300 kilometers, or 200 miles, gathering speed while closing the distance between them. As the stars spiraled faster and closer together, they stretched and distorted the surrounding space-time, giving off energy in the form of powerful gravitational waves, before smashing into each other.

At the moment of the collision, the bulk of the two neutron stars merged into one ultradense object, emitting a “fireball” of gamma rays. The initial gamma-ray measurements, combined with the gravitational-wave detection, also provide confirmation for Einstein’s general theory of relativity, which predicts that gravitational waves should travel at the speed of light.

“Gamma-rays are the high-energy electromagnetic counterparts to the LIGO discoveries. Collaborators around the world, including LSU researchers using a telescope on the International Space Station, have been eagerly looking for these events. Now, counterpart observations of this neutron star merger event with several telescopes from the radio to the gamma-ray regime are giving us valuable information about the nature of these exotic astrophysical sources,” said Michael Cherry, LSU Department of Physics & Astronomy professor and collaborator on the CALET experiment on the International Space Station.

Theorists have predicted that what follows the initial fireball is a “kilonova” — a phenomenon by which the material that is left over from the neutron star collision, which glows with light, is blown out of the immediate region and far out into space. The new light-based observations show that heavy elements, such as lead and gold, are created in these collisions and subsequently distributed throughout the universe, solving a decades-long mystery of where about half of all elements heavier than iron are produced.

The LIGO-Virgo results are published in the journal Physical Review Letters. Additional papers from the LIGO and Virgo collaborations and the astronomical community have been either submitted or accepted for publication in various journals.

“It is tremendously exciting to experience a rare event that transforms our understanding of the workings of the universe,” said France A. Córdova, director of the National Science Foundation, or NSF, which funds LIGO. “This discovery realizes a long-standing goal many of us have had, that is, to simultaneously observe rare cosmic events using both traditional as well as gravitational-wave observatories. Only through NSF’s four-decade investment in gravitational-wave observatories, coupled with telescopes that observe from radio to gamma-ray wavelengths, are we able to expand our opportunities to detect new cosmic phenomena and piece together a fresh narrative of the physics of stars in their death throes.”

The gravitational signal, named GW170817, was first detected on Aug. 17 at 7:47 a.m. Central Daylight Time; the detection was made by the two identical LIGO detectors, located in Hanford, Wash., and Livingston, La. The LIGO Livingston observatory is located on LSU property, and LSU faculty, students and research staff are major contributors to the international scientific collaboration.

The information provided by the third detector, Virgo, situated near Pisa, Italy, enabled an improvement in localizing the cosmic event. At the time, LIGO was nearing the end of its second observing run since being upgraded in a program called Advanced LIGO, while Virgo had begun its first run after recently completing an upgrade known as Advanced Virgo.

Each observatory consists of two long tunnels arranged in an “L” shape, at the joint of which a laser beam is split in two. Light is sent down the length of each tunnel, then reflected back in the direction it came from by a suspended mirror. In the absence of gravitational waves, the laser light in each tunnel should return to the location, where the beams were split at precisely the same time. If a gravitational wave passes through the observatory, it will alter each laser beam’s arrival time, creating an almost imperceptible change in the observatory’s output signal.

“The staff of the LIGO Livingston Observatory, together with students and scholars in residence, and including many from LSU, have worked hard for many years to operate and improve the detector, making it capable of participating in this discovery,” said Joe Giaime, head of LIGO Livingston and LSU professor of physics and astronomy. “The gravitational-wave and other astronomical observations reported today mark LIGO’s full involvement in multi messenger astronomy. Today’s scientific harvest has been sown and labored over for decades by colleagues around the world.”

On Aug. 17, LIGO’s real-time data analysis software caught a strong signal of gravitational waves from space in one of the two LIGO detectors. At nearly the same time, the Gamma-ray Burst Monitor on NASA’s Fermi space telescope had detected a burst of gamma rays. LIGO-Virgo analysis software put the two signals together and saw it was highly unlikely to be a chance coincidence, and another automated LIGO analysis indicated that there was a coincident gravitational wave signal in the other LIGO detector. Rapid gravitational-wave detection by the LIGO-Virgo team, coupled with Fermi’s gamma-ray detection, enabled the launch of follow-up by telescopes around the world.

The LIGO data indicated that two astrophysical objects located at the relatively close distance of 130 million light-years from Earth had been spiraling in toward each other. The two objects were estimated to be in a range from around 1.1 and 1.6 times the mass of the sun, in the mass range of neutron stars. A neutron star is about 20 kilometers, or 12 miles, in diameter and is so dense that a teaspoon of neutron star material has a mass of about a billion tons.

While binary black holes produce “chirps” lasting a fraction of a second in the LIGO detector’s sensitive band, the Aug. 17 chirp lasted approximately 100 seconds and was seen through the entire frequency range of LIGO — about the same range as common musical instruments. Scientists could identify the chirp source as objects that were much less massive than the black holes seen to date.

About the LIGO-Virgo Scientific Collaboration

LIGO is funded by the NSF, and operated by Caltech and MIT, which conceived of LIGO and led the Initial and Advanced LIGO projects. Financial support for the Advanced LIGO project was led by the NSF with Germany (Max Planck Society), the U.K. (Science and Technology Facilities Council) and Australia (Australian Research Council) making significant commitments and contributions to the project.

More than 1,200 scientists and some 100 institutions from around the world participate in the effort through the LIGO Scientific Collaboration, which includes the GEO Collaboration and the Australian collaboration OzGrav. Additional partners are listed at http://ligo.org/partners.php

The Virgo collaboration consists of more than 280 physicists and engineers belonging to 20 different European research groups: six from Centre National de la Recherche Scientifique (CNRS) in France; eight from the Istituto Nazionale di Fisica Nucleare (INFN) in Italy; two in the Netherlands with Nikhef; the MTA Wigner RCP in Hungary; the POLGRAW group in Poland; Spain with the University of Valencia; and the European Gravitational Observatory, EGO, the laboratory hosting the Virgo detector near Pisa in Italy, funded by CNRS, INFN, and Nikhef.

LSU has a video uplink studio with live broadcast capabilities. Contact us to set up an interview.