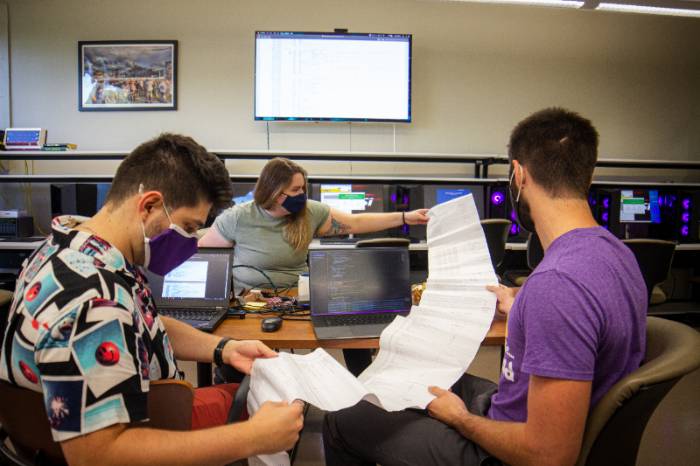 BATON ROUGE, LA – The National Centers of Academic Excellence in Cyber Operations (CAE-CO) program recently selected LSU as the sole university allowed to apply for the CAE-CO designation in 2021. This designation is currently held by only 24 other universities across the nation. It’s an achievement that would not have been possible were it not for LSU Computer Science and Engineering Professor Golden G. Richard III, who is also the associate director for LSU’s Center for Computation & Technology (CCT) and director of LSU’s Applied Cybersecurity Lab.

“LSU not only gets the opportunity to try to get designated, but also has the chance to help NCAE debug its application process, which will allow for other schools to apply for this program,” Richard III said.

Richard III, who is a GIAC/GCFA Gold Certified Digital Forensics Investigator, has received multiple grants related to cybersecurity while at LSU, including a $3.35 million National Science Foundation grant to fund 21 scholarships in cybersecurity training over a five-year period. He says that the cybersecurity field is growing exponentially each year.

“We recently tripled the size of my research lab at CCT because of the incredible explosion of students we’ve had,” he said. “The number of undergrads with a concentration in cybersecurity in the fall of 2019 was 19. This year, it’s 99.”

Not only is the number of students increasing, but so are cybersecurity jobs.

“There are 465,000 unfilled cybersecurity jobs in the U.S. today, and there is a zero percent unemployment rate among cybersecurity graduates,” he said. “One of my PhD students just started writing her dissertation and has already been hired for a job.”

While having more students take interest in cybersecurity is a good thing, it’s still a field most wish didn’t have to exist. A poll by The Pearson Institute and The Associated Press shows that nine out of 10 Americans are somewhat concerned about hacking that involves their personal information, financial institutions, government agencies and certain utilities. Other data shows that the number of data breaches publicly reported so far in 2021 has already exceeded the total for 2020.

Richard III says the best thing people can do to protect their private information is what they’ve been told to do for years.

“You can protect yourself against random attacks by not clicking on things in an email, not going to websites you don’t recognize, and not using the same password for different accounts,” he said. “The problem is if it’s a targeted attack, it’s hopeless. You lock your doors at your house assuming that a very motivated person isn’t coming after you. A non-motivated person will shake the gate, see that it’s locked and leave, but a motivated person will leap over the gate [and try to forcefully] enter your home. We don’t have solutions for that kind of situation.”

A big question many people ask is why the police aren’t always able to find out where these hackers are.

“The reason ransomware is hard to attribute to people is that people use overlay network software that essentially bounces network traffic across a bunch of sites globally and scrambles their origin,” Richard III said. “The first ransomware attack on record occurred at an AIDS conference in Panama in the 1980s. They chose this location because Panama was a non-extradition country, so they wouldn’t be brought to the U.S. to face charges. Now, your geographic location is so hidden by cryptography that the ransomware will actually set up a chat channel where they can talk to someone and negotiate terms.

“The motivation back in the day was hacking prowess and getting street cred for your abilities, but now it’s monetized, which always results in something being more sophisticated. It’s a booming illegal business.”